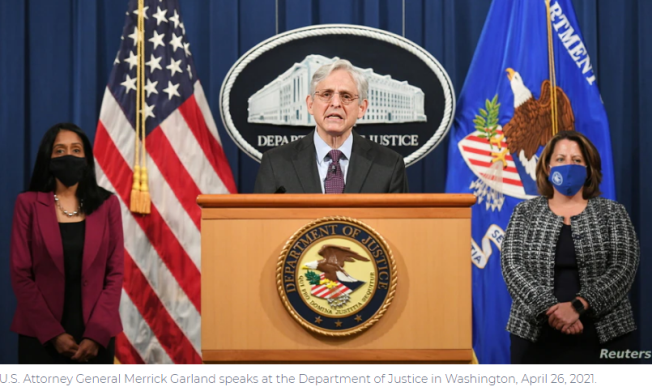 WASHINGTON – U.S. Attorney General Merrick Garland on Monday announced a federal investigation of policing practices in the southern U.S. city of Louisville, Kentucky, where officers last year shot and killed Breonna Taylor, a Black emergency technician, during a bungled raid on her home.

The Justice Department’s “pattern or practice” investigation of the Louisville police is the second of a law enforcement agency following the conviction last week of former Minneapolis Police officer Derek Chauvin in the death of African American George Floyd while in police custody last year.

The back-to-back announcements reflect President Joe Biden’s campaign promise to expand the Justice Department’s use of “pattern or practice” investigations and court-enforced consent decrees to combat police civil rights violations and other abuses in police departments. The tactic, widely used during the Obama administration, was abandoned under former President Donald Trump.

Speaking at the Justice Department, Garland said his agency’s new investigation into the Louisville-Jefferson County Metro Government and the Louisville Metro Police Department will determine whether the police force “engages in a pattern or practice of violations of the Constitution or federal law.”

In addition, Justice Department officials will examine whether the LMPD engages in discriminatory conduct on the basis of race or behavioral disabilities, the attorney general said.

The Justice Department has briefed Louisville Mayor Greg Fischer and LMPD Chief Erika Shields on the opening of the investigation, Garland said. Both officials have pledged to cooperate, he added.

“My job is to represent all of the people of Louisville,” Fischer said at a press conference in Louisville. “Not to protect the police department. Not to protect any specific interest group. It’s to make sure that justice is present throughout the entire community. And if that means welcoming audits, welcoming the DOJ, and they help us in that ultimate goal, that’s a good thing for the community.”

Fischer added that he would “regret it” if there were violations, “but the worst thing in the world would be to look the other way and deny that it happened.”

Garland’s announcement came more than a year after Taylor, 26, died March 13, 2020, after three Louisville Police officers fired on her while serving a no-knock warrant. Only one of the officers was later charged for endangerment. The case received little publicity before Floyd’s death May 25, 2020, which had the effect of thrusting it into the public debate and protest movement over police brutality and racism.

Garland said if the investigation uncovers a pattern of violations by Louisville police, the Justice Department will seek to negotiate “mutually agreeable steps” that the city and police department can take “to correct and prevent unlawful patterns or practices.” Typically, this involves negotiating a court-enforced agreement known as a consent decree, the Justice Department official said.

Attorneys for Breonna Taylor’s family negotiated a $12 million settlement in September with the city of Louisville over her death.

Garland warned that if an agreement is not reached, the Justice Department will sue the city and the police department for a court order to address the violations.

Throughout eight years in office, the Obama administration investigated 25 police departments, negotiating 14 consent decrees. On April 16, Garland rescinded a Trump-era memo that severely limited the use of consent decrees by the Justice Department.