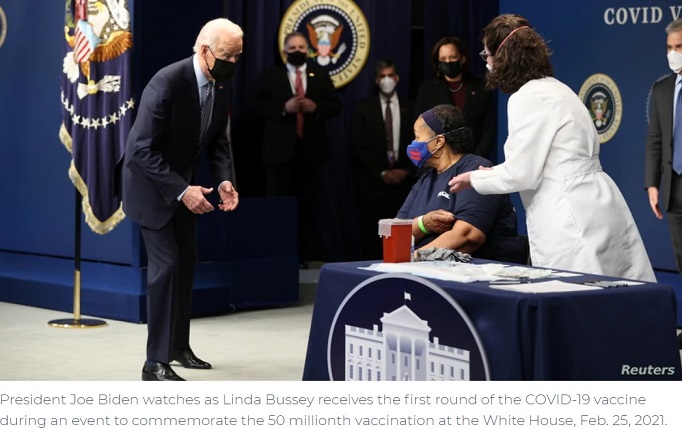 Four people — an elementary school counselor, a grocery store employee and two firefighter EMTs — were vaccinated against the virus at the White House Thursday afternoon to commemorate the milestone.

“Fifty-million shots in just 37 days since I’ve become president,” Biden told reporters at the event, noting that despite extreme weather conditions, the United States is on track to surpass his promise to vaccinate 100 million people in his first 100 days in office.

Almost half of Americans over the age of 65 have received at least one of two shots of the vaccine, according to the White House.

But U.S. officials have warned that there is still a long road ahead. Biden urged Americans to continue wearing masks and said Thursday he cannot provide a date for when things will return to “normal.”

The president’s chief medical adviser, Dr. Anthony Fauci, who heads the National Institute of Allergy and Infectious Diseases, also cautioned, “We are still at an unacceptably high baseline level,” preventing the resumption of normal society.

Earlier this week, the United States confirmed that half a million people had died of COVID-19 — the highest death rate from the virus in the world.

In 2020, the virus shaved a full year off the average life expectancy in the United States, the biggest decline since World War II, according to a new report from the National Center for Health Statistics.