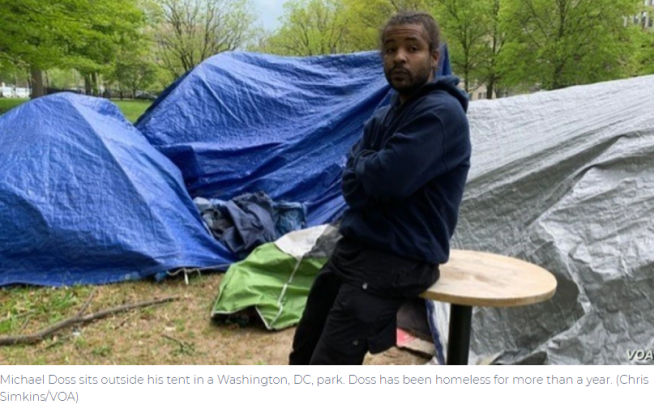 WASHINGTON – Michael Doss cleans up around his tent, the place he calls home in Washington, D.C. He’s not alone; dozens of people are living outdoors in makeshift shelters within view of landmarks and federal government buildings.

The nation’s capital, like many U.S. communities, is struggling to cope with a growing homelessness crisis aggravated by the historic economic downturn and the coronavirus pandemic.

“I was forced to live on the streets,” Doss told VOA. He’s among nearly 600,000 Americans living without adequate shelter. “I lost my bartending job, then my apartment, and things kind of spiral downhill from there,” said the 33-year-old African American D.C. native. Doss points to a section of the park where he’s seen this tent encampment grow in the last few months. “We have a lot of military veterans, immigrants and minorities living here. I’ve been out here for more than a year,” he said.

Nearly 10 out of every 1,000 D.C. residents are homeless, two times the national average. Minorities are especially impacted with Blacks, Native Americans and Hispanics far more likely to be homeless than white Americans.

“There are huge racial disparities in homelessness and the result of systemic racism in housing and in other sectors,” said Sarah Saadian, vice president of public policy at the National Low Income Housing Coalition. “African-Americans make up 13% of the U.S. population but are about 40% of people who experience homelessness and make up more than half of all families experiencing homelessness.”

Army veteran Edward McCoy has been homeless since 2018. “I want to get into a stable and safe place,” he told VOA. “I’ve been robbed 10 times in this D.C. park and need help getting out of here.”

President Joe Biden’s American Rescue Plan Act, passed by Congress and signed into law in March, calls for spending billions of dollars to help the displaced and those at risk of becoming homeless. Cities and states can use the money to help safely house people during and after the pandemic. The rescue plan also provides more than $46 billion for emergency rental assistance. Non-governmental organizations estimate that between 30 million and 40 million people were at risk of losing their homes during the pandemic.

The federal government aid package contains $5 billion in emergency housing vouchers for people at risk of or experiencing homelessness. “We estimate those funds could allow us to house at least 150,000 people and create as many as 30,000 units of affordable housing,” said Nan Roman, president of the National Alliance to End Homelessness. “We’ll work with communities to make sure the resources are well targeted and used quickly to get people into housing.”

Washington city officials are hopeful people living in homeless encampments will be relocated soon after old hotel and motel rooms are converted into permanent affordable housing.

“The city will receive $19 million in funds from the American Rescue Plan, “which is four times what we normally get,” said Washington, D.C. Mayor Muriel Bowser. “Here in D.C., we have been very focused on making homelessness rare, brief, and nonrecurring.”

In Los Angeles a federal judge is calling for urgent action to find shelters for tens of thousands of homeless people by November. Judge David Carter criticized local officials for not being able to curb the growth of homelessness. “All the rhetoric, promises, plans and budgeting cannot obscure the shameful reality of this crisis,” Carter said in his order. As of January, more than 66,000 people were estimated to be homeless in Los Angeles County.

“The private sector can’t build all the housing needed for people who are experiencing homelessness,” she said. “There has to be federal subsidies.”