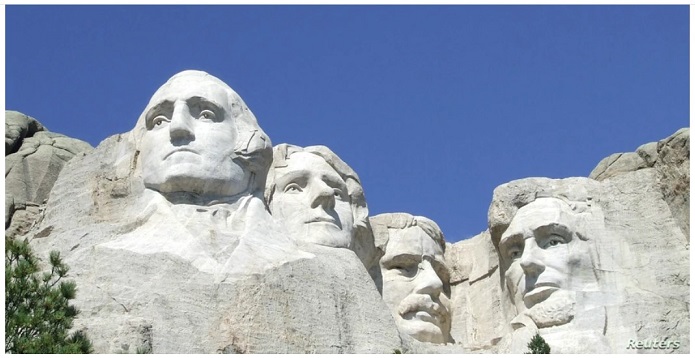 The holiday is observed on the third Monday of February, the birth month of two of the country’s most prominent presidents – George Washington, the nation’s first president, and Abraham Lincoln, who led the country through the Civil War.

While some U.S. workers have the day off, including federal employees and bankers, many do not.

Taking place in the middle of winter, the holiday is not associated with the barbeques and picnics of summer holidays and is often used as an opportunity for companies to offer discounted car and retail sales.

This year, a Boston-based auction house, RR Auction, is timing an auction of presidential memorabilia around the holiday.

Nearly 300 presidential artifacts are available to be bid on in the online auction, including John F. Kennedy’s crimson Harvard sweater, locks of Washington’s hair, and a signed photograph of Lincoln.

Presidents Day got its beginnings with the celebration of Washington’s birthday every year on February 22.

Congress officially made the day a federal holiday in 1968, when it also moved it to the third Monday of February to make a three-day weekend.

At that time, some argued the holiday should include a celebration of Lincoln’s birthday, which falls on February 12, and be renamed from Washington’s Birthday to Presidents Day.

Lawmakers rejected that idea, and the holiday is still officially named Washington’s Birthday. However, the day is now commonly known as Presidents Day and is seen by most as a celebration of all U.S. presidents.

When Joe Biden was inaugurated on January 20, he became the country’s 46th president.

He is the 15th president to previously have served as vice president. Of those, eight assumed the presidency because of the death of a president, while one – Gerald Ford – took office after the resignation of a president – Richard Nixon.

Biden, who also served in the Senate for 36 years, follows a trend of presidents previously serving in Congress, becoming the 26th president to have been a representative or senator. Seventeen senators have become president, including Biden, but only three senators moved directly from the Senate to the White House — Warren G. Harding, Kennedy and Obama.

The new president is only the second Catholic president, after Kennedy, with all other presidents having been Protestant. No presidents have been Jewish or Muslim and while none have publicly professed atheism, Thomas Jefferson, Lincoln, and William Howard Taft were thought by some to be agnostic or atheist.

Biden has the distinction of being the oldest president to enter the White House at age 78, surpassing Donald Trump who was previously held the title, assuming office in 2017 at age 70.

The youngest president, Theodore Roosevelt became president at 42, followed by Kennedy, who came to the White House at age 43.