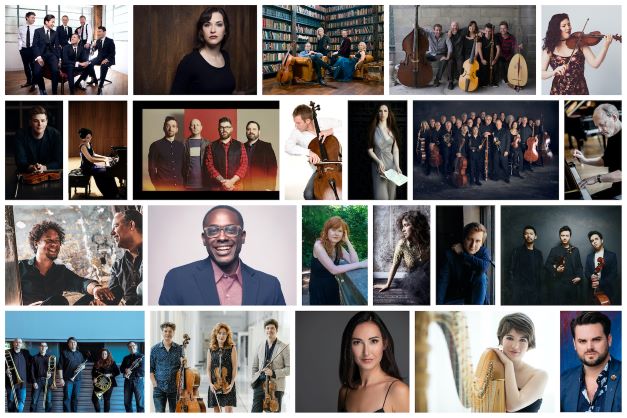 Newport Classical has a rich legacy of musical curiosity, presenting the American debuts of over 130 international artists and rarely heard works, and is most well-known for hosting these summertime concerts. Since its founding in 1969, the organization has produced more than 3,000 concerts and hosted more than 1,200 musicians and singers. This year’s festival includes music by more than 40 women composers.

Executive Director Gillian Friedman Fox, now in her second year with Newport Classical, says, “I am thrilled to present a full summer season back inside our iconic venues and welcome several significant artists in their Newport debuts. In particular, this year I am looking forward to introducing our audiences to many rarely performed works by female composers. This summer continues our goal of connecting the core repertoire with works by living composers while placing a particular focus on elevating women in classical music and the role they have played in composition and performance throughout the centuries.”

In 2021, the organization launched a new commissioning initiative – each year, Newport Classical is commissioning a new work by a Black, Indigenous, person of color, or woman composer as a commitment to the future of classical music. This year, the commissioned composer is Shawn E. Okpebholo. Okpebholo is a critically acclaimed and award-winning composer whose music has been described as “devastatingly beautiful” and “fresh and new and fearless” (The Washington Post), and “staggering” (The New Yorker). He has been featured on PBS Newshour, and radio broadcasts across the country including NPR’s All Things Considered and Morning Edition. His new piece, written for Newport Classical, will be premiered on July 9 at The Breakers by Cuban pianist Aldo López-Gavilán*. Okpebholo’s piece is inspired by Occramer Marycoo, an enslaved African in 18th-century Newport whose owner dubbed him Newport Gardner. Marycoo, despite his enslavement, became educated, spoke multiple languages, and became a trained classical musician. He is credited with being the first African-American person to have a composition published in the Western style, titled “Crooked Shanks.” Okpebholo says, “This work is inspired by ‘Crooked Shanks,’ though my approach reflects the paroles of the enslaved, the hope of freedom, and the return home.”

For the Festival’s annual, highly anticipated Opera Night, Newport Classical presents a concert performance of Puccini’s passionate La bohème at The Breakers. This year’s production was cast by Trevor Neal, Newport Classical Director of Artistic Planning and Engagement, who says, “One could hardly imagine a piece more quintessentially opera than Puccini’s La bohème. This lush score is both joyful and heartbreaking and the ideal score for our patrons to reconnect with timeless stories, or for the newcomer, experiencing it for the first time. Dane Suarez* and Shannon Jennings* lead this exceptional cast of artists who have performed these roles on major stages across this country and around the world. In her role debut, contralto Emily Geller* will perform the traditionally buffo roles of Benoit and Alcindoro, adhering to the optional early performance practice of Puccini’s Masterwork.”

Newport Classical’s popular Festival Artists program will also be making a return in 2022, with a reinvented framework. Five rising-star musicians will come to Newport for the duration of the Festival, performing in eight concerts, leading educational workshops for students and offering free programs for the community. This year’s artists are Gabriel Diaz (violin), Ariel Horowitz* (violin), Jordan Bak* (viola), Jacqueline Choi (cello) and Charles Kim* (piano).

Other highlights of this year’s festival include: