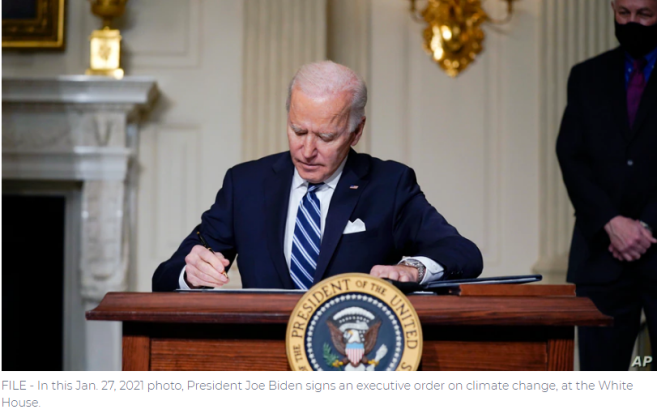 Like all U.S. presidential candidates, Joe Biden spent most of last year’s election campaign making promises. As his 100th day in office approaches — a traditional, if arbitrary, milestone for assessing presidential performance — he has delivered on many of them, but fallen short on others.

The president’s campaign promises can be sorted into three broad baskets, regardless of the policy areas in which they fall.

There was the low-hanging fruit — things Biden really could accomplish “on Day One” with the stroke of a pen or the issuance of an order. As of April 15, Biden had signed 49 different executive orders and memoranda, far more than his recent predecessors:  Donald Trump (36), Barack Obama (34) and George W. Bush (12).

Slightly more difficult to achieve, though still within the sole purview of the executive branch, were other policy changes and initiatives that would take some time to implement but could be achieved with no input from members of Congress.

Finally, there were the grand promises of a transformed relationship between the two major parties. Biden said he would work to bring Republicans and Democrats together to work in a bipartisan fashion on issues of importance to the country.

Across a wide array of policy areas, Biden quickly accomplished most of the issues in that first basket, and some in the second, but efforts to achieve bipartisan successes in Congress have almost all come up empty.

Biden was quick to take care of the easy wins on issues related to the climate and global warming. In his first eight days in office, he announced that the U.S. would rejoin the Paris climate accord, issued a slew of executive orders halting projects associated with high greenhouse gas emissions, like the Keystone XL pipeline, and announced that he would ask the Senate to ratify an international accord on reducing the production of hydrofluorocarbons.

On Thursday, Biden kept his promise to convene an international climate summit, gathering world leaders for a virtual conference in advance of the 26th United Nations Climate Change Conference in Glasgow in November. He pledged to reduce U.S. greenhouse gas emissions by half by 2030, using 2005 levels as a baseline.

Biden’s vow to create new energy infrastructure in the U.S., ranging from electronic vehicle charging stations to a smart electrical grid, is part of a massive infrastructure package that is currently working its way through Congress.

Other initiatives have been slower to take off. A promise to make 30% of the land and water in the United States subject to conservation requirements has not been fleshed out with an official proposal. The administration is also still working on ways to get the aviation and transport industries to commit to emissions reductions.

Simply put, there isn’t much low-hanging fruit to be had in the debate over gun control in the United States. Earlier this month, the White House announced a pending proposal to slow the proliferation of so-called “ghost guns” that individuals can assemble from separately purchased parts without serial numbers for identification. The administration said that within 60 days it would publish model “red flag” legislation for states, which could block individuals deemed to pose a threat from purchasing firearms.

Biden had promised to send Congress a gun control bill, but instead threw his support behind two measures in the House of Representatives strengthening background checks and regulating the transfer of firearms. Both bills passed in that chamber, but are stalled in the Senate.

Biden’s promise to sign a bill renewing the Violence Against Women Act is contingent on the bill passing Congress and, while the House approved it in a bipartisan vote last month, the Senate has taken no action.

On his first day in office January 20, Biden announced a mask mandate in federal buildings and sent a letter informing the World Health Organization that the U.S. would like to rejoin that organization after the Trump administration withdrew.

Biden has also been able to keep, and often exceed, other pandemic-related promises. An initial vow to deliver 100 million vaccinations in 100 days has been greatly exceeded, with twice that number already completed, and the administration made good on promises to set up 100 mass vaccination sites and to create mobile vaccination clinics.

A pledge to reopen most schools for in-person instruction has been less successful, in large part because decisions about local school policies are not within the purview of the White House. The U.S. Centers for Disease Control and Prevention did issue guidelines on how to safely reopen schools and other public facilities, but only a little more than half of public schools are open full time for in-person learning.

Biden did away with former President Donald Trump’s controversial travel ban and expanded deportation criteria on his first day in office, and at the same time he halted construction on the wall that the Trump administration was attempting to build on the U.S-Mexico border. He attempted to implement a 100-day “freeze” on deportations, but that effort was blocked by a court ruling.

Within the first month of his term, Biden also sent Congress an immigration bill that would create a pathway to citizenship for many undocumented immigrants and announced a program aimed at reuniting children who were separated from their families by the previous administration.

The administration appears to have stumbled badly in its efforts to restore the acceptance of refugees into the U.S. to pre-Trump levels. After promising to accept 62,500 in fiscal year 2022, the administration last week reduced that number to 15,000. The White House then said Biden would raise that number in May, but likely not to the promised level.

On his first day in office, Biden signed an executive order calling for a comprehensive assessment of racial equity in the federal government and in the services it provides.

Within his first few months in office, Biden had signed multiple executive actions meant to protect people from discrimination on the basis of sex, sexual orientation or gender identity, including the lifting of a ban on transsexuals serving in the armed forces. However, his promise to sign the Equality Act, which would codify many of those protections, has stalled in the Senate after the legislation passed the House in February.

The White House placed a hold on the creation of a police oversight commission, instead electing to work toward passage of a police accountability law in Congress.

Biden pledged to restore America’s standing across the globe by reengaging with allies, and in the opening months of his term, he has begun the work of repairing U.S. relations with NATO countries and U.S. security partners in the Pacific region.

Biden also promised to bring the U.S. back into the Joint Comprehensive Plan of Action, better known as the Iran nuclear deal. Talks to do that have begun, but success is far from assured.