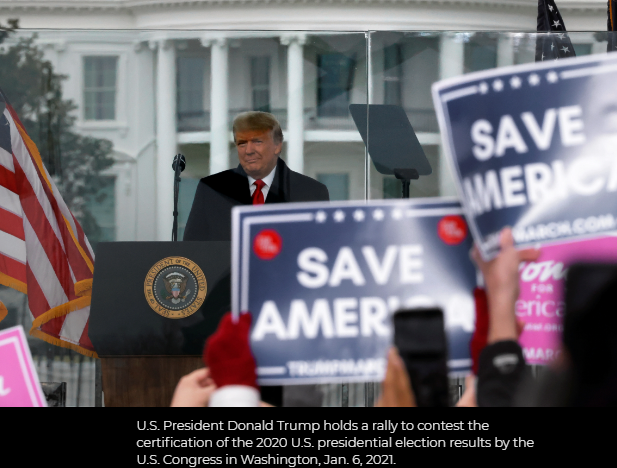 WASHINGTON – Three paragraphs into the introduction to the brief submitted by Democrats in the House of Representatives is a window into their strategy for the U.S. Senate impeachment trial of former President Donald Trump.

In accusing the then-president of inciting a “violent mob to attack the United States Capitol,” the brief portrays the attackers as “insurrectionists [who] assaulted police officers with weapons and chemical agents,” taking control of the major parts of the Capitol. “Members and their staffs were trapped and terrorized. … Hundreds of people were injured in the assault. Five people — including a Capitol Police officer — died,” the brief reads.

Further into the four-page introduction, Democrats indicate they will use Trump’s words against him, quoting from the “Save America Rally” that preceded the January 6 siege of the U.S. Capitol.

And they will use the words of those who carried out the attack to recreate the scene for the jury of senators who witnessed it.

“Safety arguments are really strong. Fear appeal, safety arguments, appeals to frustration, those are all really negative emotional states that have action tendency that is very active,” Mercieca said.

“That’s very powerful,” she added. “If they can activate people’s memories of the event and they can sort of remind them of the fear that they felt, and [get them to] react to that fight or flight response, they might [be] able to participate even beyond the partisanship.”

With the 100-member Senate evenly split, it would require 67 votes — a two-thirds majority — to convict the former president, meaning Democrats would need 17 Republicans to vote with them.

For Republicans, the word “former” lies at the heart of their strategy.

“If the accused is no longer president, where’s the constitutional power to impeach him?” Republican Sen. Rand Paul of Kentucky asked during debate of his motion to declare the trial unconstitutional. “Impeachment is for removal from office. And the accused here has already left office.”

Paul’s motion on constitutionality did not pass, but the 55-45 vote left Democrats well shy of the 67 needed to convict Trump.

Only after conviction can the Senate hold a majority vote to bar Trump from ever holding office again.

“I think [Republicans] really are just trying to keep this at the level of procedure,” Mercieca said, noting the brief filed by Trump’s lawyers focuses on his departure from office.

“He’s already out of office and so it is now unconstitutional to remove him from office, that it’s not the duty of the Senate to do that in this case,” she said.

Attorneys for the former president have rejected the Democrats’ formal request to have Trump testify at the trial. Add social media’s banning of Trump and Mercieca observes a challenge for Democrats.

The fact that he’s been de-platformed, she said, actually hurts the fear-based arguments that Trump remains a clear and present danger.

“Because if he was still online … I think he would be saying those things that are very similar to the things that he said on January 6th and in the aftermath,” Mercieca said. “I think that he would still be reminding people that he is clear and present danger to the republic. So, I think that that’s part of his strategy, that silence is strategic.”

The prosecution begins its arguments on February 9.