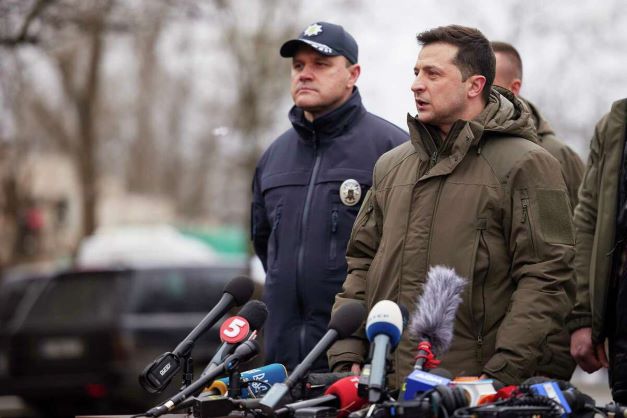 WASHINGTON — U.S. President Joe Biden assured Ukrainian President Volodymyr Zelenskiy on Sunday of Washington’s commitment to “Ukraine’s sovereignty and territorial integrity” even as the United States says the threat of a Russian invasion of Ukraine looms as a “distinct possibility” in the coming days.

Biden conferred by phone with the Ukrainian leader from the Camp David presidential retreat outside Washington, where the U.S. leader is spending the weekend as Western officials express increased fears that Russian President Vladimir Putin could attack the one-time Soviet republic in the next few days, possibly by Wednesday.

The White House said in a statement that Biden “made clear [to Zelenskiy] that the United States would respond swiftly and decisively, together with its allies and partners, to any further Russian aggression against Ukraine.”

Biden, however, has ruled out sending U.S. troops to fight alongside Ukrainians in the event of a Russian invasion, while vowing to impose “swift and severe” economic sanctions.

The White House said Biden and Zelenskiy “agreed on the importance of continuing to pursue diplomacy and deterrence” to a Moscow invasion, although Western diplomatic overtures to Putin have so far failed to end the stalemate.

Jake Sullivan, Biden’s national security adviser, told CNN’s “State of the Union” show that the U.S. cannot predict whether Russia might invade this week or after the Beijing Olympics end in a week, but that there is “a distinct possibility there will be a major military action.”

While the U.S. has warned for several months of the threat of a Russian attack, Sullivan said “in the last few days” Moscow has accelerated its military buildup.

Biden, in an hour-long call Saturday with Putin, warned the Russian leader that invading Ukraine would cause “widespread human suffering.” Biden said the United States and its allies remained committed to diplomacy to end the crisis but were “equally prepared for other scenarios.”

The Western allies have ruled out Russian veto power over NATO membership as a nonstarter but said they are willing to negotiate other security issues, such positioning of missiles in NATO counties closest to Russia and NATO troop training exercises.

Moscow’s troops have now surrounded much of Ukraine with more than 130,000 troops, to the north of Ukraine in Russian ally Belarus and along Ukraine’s eastern border with Russia, while positioning warships to the south in the Black Sea along the Crimean Peninsula that Russia annexed from Ukraine in 2014.

“I’m not handicapping what will happen,” Sullivan said, but added that the U.S. and its allies would impose a “significant strategic [economic] loss” on Russia if it attacks Ukraine.

While ruling out sending the U.S. military to fight in Ukraine, Biden sent 5,000 U.S. troops to NATO countries in eastern European countries closest to Russia to help bolster their fighting forces.

The U.S. has urged all Americans living in Ukraine to leave immediately, and the Defense Department has pulled out 160 military advisers who had been assisting the Kyiv government.

Sullivan said the U.S. believes a Russian attack could start with a barrage of missiles and aerial bombings followed by a ground invasion.

“Civilians could be killed regardless of their nationality,” he said.

Numerous countries have ordered their diplomatic personnel to leave Kyiv, while some are keeping smaller contingents in consulates in the western Ukrainian city of Lviv, near the Polish border.

Several international airlines have stopped flying into Ukraine because of the impending threat of warfare, although Ukraine said it has not closed its airspace.

Dutch airline KLM said Saturday that it has canceled flights to Ukraine until further notice.

Dutch worries about the potential danger in Ukrainian airspace are high in the wake of the 2014 shootdown of a Malaysian airliner over an area of eastern Ukraine held by Russia-backed rebels. All 298 people aboard were killed, including 198 Dutch citizens.

The Ukrainian charter airline SkyUp said Sunday that its flight from Madeira, Portugal, to Kyiv was diverted to the Moldovan capital, Chisinau, after the Irish leasing company that owns the plane said it was banning flights in Ukrainian airspace.

Some material in this report came from the Associated Press.