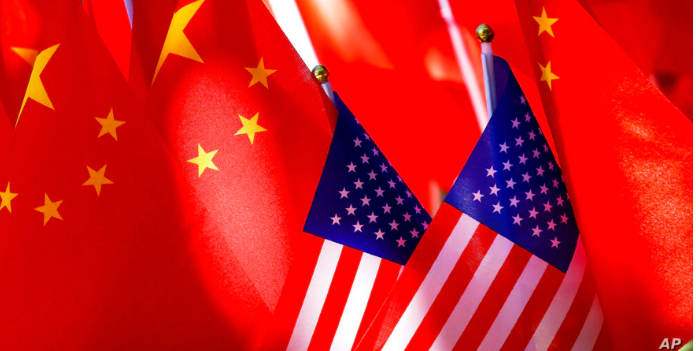 Biden “affirmed his priorities of protecting the American people’s security, prosperity, health, and way of life, and preserving a free and open Indo-Pacific,” according to a readout provided by the White House.

“President Biden underscored his fundamental concerns about Beijing’s coercive and unfair economic practices, crackdown in Hong Kong, human rights abuses in Xinjiang, and increasingly assertive actions in the region, including toward Taiwan,” the readout said.

Chinese state television said President Xi told Biden that bilateral cooperation is the only choice to resolve and manage their differences.  Xi called for various one-on-one dialogue mechanisms to resume to avoid any sort of misunderstandings.

The television report also said Xi told Biden he hopes the U.S. will act “cautiously” with respect to such as issues as Taiwan, Hong Kong and Xinjiang, which are matters related to China’s internal affairs and its “sovereignty and territorial integrity.”

The call came just hours after Biden’s first visit to the Pentagon as commander in chief, where he signaled his administration is prepared to counter a rising China, announcing the formation of a task force to reexamine everything, from U.S. strategy and force posture to technology and intelligence, with regard to Beijing.

“The task force will work quickly, drawing on civilian and military experts across the department to provide within the next few months recommendations to [Defense] Secretary [Lloyd] Austin on key priorities and decision points so that we can chart a strong path forward on China-related matters,” Biden told reporters.

“It will require a whole-of-government effort, bipartisan cooperation in Congress and strong alliances and partnerships,” the president added. “That’s how we’ll meet the China challenge and assure the American people win the competition of the future.”

Biden’s critics have repeatedly seized on China as an area of weakness for the recently elected president, loudly harping on what they described as his inability to stand up to Beijing during the recent U.S. presidential campaign.

“China would own our country if Joe Biden got elected,” former President Donald Trump told his supporters this past August.

Fueling the political rancor, Trump and his allies pointed to a preelection U.S. intelligence assessment that concluded China “prefers that President Trump – whom Beijing sees as unpredictable – does not win reelection.”

But officials Wednesday insisted that unlike his predecessor, Biden is in a “strong position” to push China on areas of concern while also holding open the possibility for cooperation.

“It’s been a very active three weeks,” a senior administration official told reporters on the condition of anonymity due to the nature of the conversations.

“We have a dual carrier operation in the South China Sea,” the official said. “We have transited the Taiwan Strait to show our commitment to no unilateral changes to the status quo when it comes to Taiwan, and we have already begun exercises under the Biden administration, naval exercises and other military exercises with key regional partners.”

Officials also said that although the Defense Department is conducting a review of U.S. forces across the globe, troop reductions in the Asian-Pacific are unlikely.

“We’re seeing a pattern of behavior that is causing really, quiet and sometimes not so quiet concern among friends and partners,” a second senior administration official said.

The Pentagon on Wednesday said the new China Task Force would work at a “sprint,” aiming to produce a series of recommendations to guide Washington’s policies toward Beijing within a matter of months.

Biden administration officials have previously warned the need to confront China extends beyond the military and economic spheres, emphasizing Washington must work equally hard to compete with China’s sales pitch to the rest of the world.

“China is essentially making the case that the Chinese model is better than the American model,” National Security Adviser Jake Sullivan said during a virtual forum last month.

“They’re pointing to disfunction and division in the United States and saying take a look at that. Their system doesn’t work. Ours does.”

U.S. officials have also consistently raised concerns about China’s industrial espionage, its theft of biomedical information and the potential manipulation of technology, like 5G cellular networks.

There have also been ongoing tensions over Beijing’s initial handling of the coronavirus pandemic, which Chinese officials have repeatedly tried to blame on others.