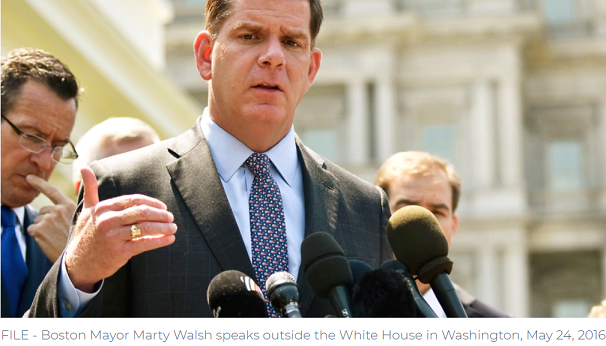 Walsh, who has been Boston’s mayor for two terms after 17 years as a Massachusetts state representative, has a long history with labor unions. He previously led Boston Building and Construction Trades Council, an umbrella organization for unions.

While the American Federation of Labor and Congress of Industrial Organizations (AFL-CIO) has shown its support for Walsh, other notable U.S. unions, including the United Auto Workers and the Utility Workers Union of America, indicated their support for another top contender for the job, Michigan U.S. Representative Andy Levin.

Biden and Walsh have known each other for years. Biden spoke at Walsh’s second inauguration as Boston’s mayor, calling him a “man of extraordinary character in a moment when we need more character and incredible courage.”

Walsh’s appointment must be confirmed by the Senate.

Raimondo served as Rhode Island’s treasurer before her two terms as governor and was previously a venture capitalist.

Biden has signaled he opposes Chinese tariffs — a significant difference from the Trump administration — in an indication of how the next commerce secretary’s job would differ from the current one’s.

If confirmed, Raimondo will likely coordinate with Biden’s pick to lead the U.S. Treasury, Janet Yellen, who would be the first woman to serve in that role.

Earlier Wednesday, Biden announced his picks for attorney general and three other top positions at the Department of Justice.