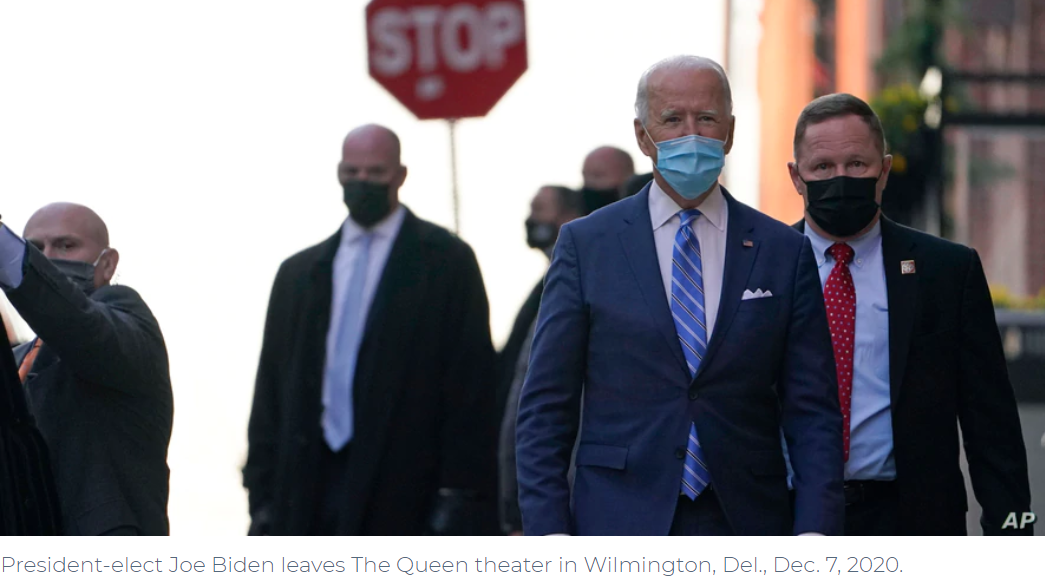 WASHINGTON – U.S. President-elect Joe Biden is introducing his top health care officials on Tuesday, all of whom will quickly face the country’s grim world-leading coronavirus statistics: nearly 15 million infections and more than 283,000 deaths.

Biden, set to be inaugurated January 20, has vowed an all-out fight to control the pandemic and says he will call on Americans to wear face masks in public for the first 100 days of his presidency. The number of new U.S. coronavirus cases is soaring, reaching 200,000 or more on some days.

Biden has tapped former Congressman Xavier Becerra to be his Health and Human Services chief to lead the country’s fight against the virus and oversee millions of vaccinations in the coming months. The U.S. Food and Drug Administration could approve the first vaccine against COVID-19 in the coming days, although it will be months before most Americans are inoculated.

Although Biden has promised to get inoculated when a vaccine is approved as safe, polls show about four in 10 Americans are wary of getting the shots or will refuse to be vaccinated.

“We look forward to, you know, sharing all the information and working together,” Slaoui said. “Our objective has always been outside of politics and making sure we make available these vaccines for the U.S. people, and that’s what we’re doing.”

Becerra, Biden’s choice to lead the sprawling Health and Human Services agency, is currently attorney general for the western state of California. Becerra led the defense last month in the U.S. Supreme Court against a conservative bid to overturn the country’s Affordable Care Act, in a case yet to be decided.

At one point during his 24 years in the House of Representatives, Becerra worked to win approval for the national health care law that has provided insurance coverage to millions of Americans.

Biden picked Dr. Anthony Fauci, the country’s top infectious disease expert, as his chief medical adviser on COVID-19, which is caused by the coronavirus. Fauci will also continue in his longtime role as director of the National Institute of Allergy and Infectious Diseases.

Fauci, 79, has served as a medical adviser to six U.S. presidents and for months was the face of the U.S. government’s response to the pandemic. But in the months before the presidential election, Trump grew increasingly angered at Fauci’s grim assessments of the spread of the infection and sidelined him in favor of more upbeat commentary.

Biden has also decided to nominate retired four-star Army General Lloyd J. Austin to be secretary of defense, according to numerous news accounts.

Austin, 67, a career officer, graduated from the U.S. Military Academy at West Point in 1975 and served 41 years. He would need a congressional waiver to become defense secretary because he has not been out of uniform for at least seven years. If confirmed, he would be the Pentagon’s first Black leader.

Throughout his campaign, Biden said he will pay close attention to scientific findings about the coronavirus from Fauci and other medical experts. Aside from reviewing the Pfizer vaccine, U.S. health regulators are to review another produced by the Moderna biotechnology firm next week. Millions of doses of the vaccines could be available later this month, with millions more in early 2021.

Biden named Dr. Vivek Murthy as surgeon general, a position he held from 2014 to 2017 during the administration of former President Barack Obama, when Biden was second-in-command.

The president-elect picked Dr. Rochelle Walensky, a top expert on virus testing, prevention and treatment in the eastern state of Massachusetts, as director of the Centers for Disease Control and Prevention. She is chief of infectious diseases at Massachusetts General Hospital and a professor of medicine at Harvard Medical School.

Biden chose Dr. Marcella Nunez-Smith, an expert on health care disparities among racial and ethnic groups in the U.S., as chair of his COVID-19 equity task force. She is an associate professor of medicine, public health and management at the Yale School of Medicine.

The president-elect picked business executive Jeffrey Zients, a former director of the National Economic Council under Obama, as a coordinator of his COVID-19 response team and a counselor to him. Biden named former White House and Pentagon senior adviser Natalie Quillian as deputy coordinator of the government’s response to the pandemic.

The Biden transition team said the health officials “will help fulfill the president-elect’s vision of making health care a right, not a privilege, for all Americans — building on the Affordable Care Act to lower health care costs and tackle prescription drug costs.”

In a statement, Biden said, “This trusted and accomplished team of leaders will bring the highest level of integrity, scientific rigor, and crisis-management experience to one of the toughest challenges America has ever faced — getting the pandemic under control so that the American people can get back to work, back to their lives, and back to their loved ones.”

He said that after his inauguration next month, the government would “expand testing and masking, (and) oversee the safe, equitable and free distribution of treatments and vaccines.”

Biden said his administration would “rally the country and restore the belief that there is nothing beyond America’s capacity if we do it together.”