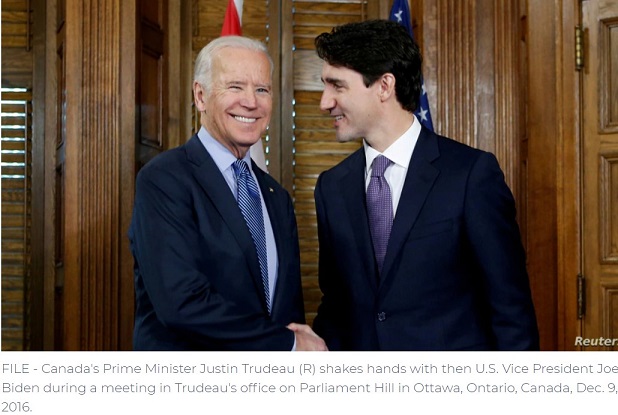 The two leaders are set to discuss China, climate change and other issues, according to a Biden administration official who spoke to reporters anonymously, as they try to reset relations that soured during Donald Trump’s four years as U.S. president.

The official told reporters that Biden is eager to discuss security threats presented by climate change, the coronavirus, as well as threats posed by China, Iran, North Korea and Russia.

White House spokesperson Jen Psaki said “no changes are anticipated” in Biden’s position on the pipeline issue during the meeting.

Trudeau plans to show that Canada is realigned with the U.S. on COVID-19, foreign policy, climate change and other issues, according to a Canadian government source who also spoke anonymously before the meeting.

It is unclear if Trudeau would again propose that Canada be allowed to buy COVID vaccines from a Pfizer manufacturing facility in the U.S. Midwestern state of Michigan for its struggling vaccination program.

Trudeau first raised the issue during a phone conversation last month, Biden’s first with a foreign leader as president. A senior Biden administration official said, however, that Biden is focused on vaccinating people first in the U.S.

Canada has frequently been the first stop abroad for a newly elected U.S. president, but COVID-19 has turned the bilateral meeting into a virtual affair.

Officials said Biden and Trudeau will deliver remarks to the media before and after their meeting.

The Biden administration also said a shared document summarizing collaborations between the two countries on a wide range of issues would likely be disclosed after the meeting.