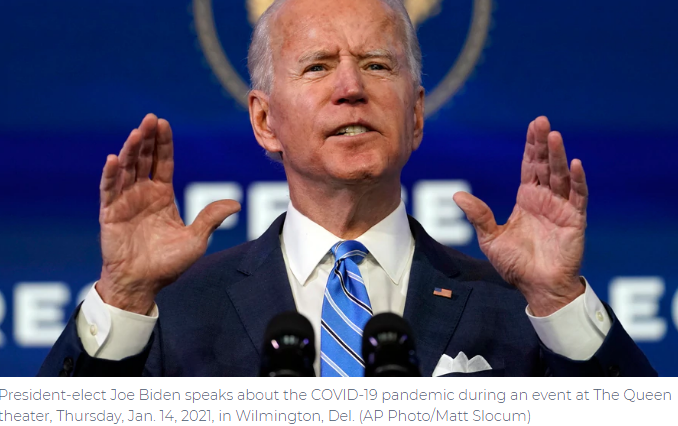 WASHINGTON – President-elect Joe Biden is promoting a $1.9 trillion economic relief package to a country battered by a year-long pandemic that will have killed over 400,000 Americans and sickened tens of millions more before he takes office this week.

The proposal announced Thursday evening is an aggressive start for an administration that will have only slim Congressional majorities to work with, especially as it comes layered atop a policy agenda packed with a wide array of Democratic priorities. These range from combatting climate change to safeguarding voting rights to reforming America’s immigration system.

It will also have to compete for lawmakers’ attention with a Senate trial of Biden’s predecessor, Donald Trump, who was impeached Jan. 13 on accusations that he incited a violent mob that stormed the U.S. Capitol as Biden’s election victory was being certified.

Since President Franklin Roosevelt’s historic push to enact major portions of his Depression-era “New Deal” beginning in the early 1930s, all succeeding presidents have been measured by how much of their agenda they could pass during the first 100 days of their administrations. Biden appears determined to push a major chunk of his agenda through Congress in the early going, experts say.

“What other president has come in arguing for a $2 trillion stimulus right out of the gate?” asked Dan Mahaffee, senior vice president and director of policy at the Washington-based Center for the Study of the Presidency and Congress. The closest comparison, he said, was to the beginning of the Obama administration, in which Biden served as vice president, when the president signed a $787 billion economic stimulus package weeks after inauguration.

Biden will have to deal with much slimmer majorities in each chamber than Obama did. Yet his plan is “even greater because it’s a twin public health and economic challenge,” Mahaffee said.

‘A crisis of deep human suffering’

Flanked by Vice President-elect Kamala Harris on a stage in Wilmington, Delaware, Biden described a nation in urgent need of help after months of lockdowns constrained consumer spending and left widespread economic devastation.

“Some 18 million Americans are still relying on unemployment insurance, some 400,000 small businesses have permanently closed their doors and it’s not hard to see that we are in the middle of a once-in-several-generations economic crisis with a once-in-several-generations public health crisis,” Biden said. “A crisis of deep, human suffering is in plain sight and there’s no time to waste. We have to act and we have to act now.”

But in a foretaste of the headwinds facing Biden, Florida Republican Senator Marco Rubio promptly tweeted a likely line of resistance.

“President-Elect Biden served in the Senate for over 35 years. So he knows the plan he outlined tonight can’t pass ‘quickly’,” Rubio wrote. The senator called for prioritizing payments to lower and moderate-income Americans, saying, “Let’s get the extra money to people first.”

The largest element of the proposal is, by far, approximately $1 trillion in direct payments and other measures meant to support struggling individuals and families. It would add $1,400 in immediate payments to the $600 checks signed into law by President Trump last month, and would increase and lengthen the duration of unemployment benefits. Other elements of the plan would raise the federal minimum wage to $15 per hour, protect renters from eviction, and provide increased food aid to the needy.

Biden’s plan also calls for $440 billion in direct aid to small businesses and state, local, and tribal governments, which have seen tax revenues plummet during the economic downturn caused by the pandemic.

Finally, the proposal would dedicate $400 billion to a greatly increased federal response to the pandemic. Biden envisions a national vaccination program, expansion of diagnostic virus testing, and support for schools and healthcare workers.

A much broader agenda

The package Biden put forward on Thursday will become the number one priority of his new administration, but it is far from the only thing he hopes to accomplish in his first months in office. Other policy priorities include:

Foreign Policy — Having spent much of his 36-year career in the U.S. Senate serving on that chamber’s Foreign Relations Committee, Biden has promised to repair relationships with allies and other countries alienated by the Trump administration’s isolationist “America First” agenda. He also vows to convene an international summit focused on combating corruption and militant nationalism.

Voting Rights — Democrats have long been eager to pass an expansion of the Voting Rights Act, aimed at reducing the ability of states and localities to hamper or restrict the ability of citizens to vote in elections, and Biden is expected to push for those reforms.

Criminal justice reform — Responding to public outrage over a rash of police killings of unarmed African American men, Biden has promised to establish a national police oversight commission and to invest in community policing strategies meant to help de-escalate tensions between law enforcement and the communities they serve. He also backs comprehensive sentencing reform and programs to reduce continued criminal activity by those released from jail.

Environment — Biden has indicated that he will re-join the Paris Climate Accord and will take other steps to make the United States a global leader in the effort to reduce climate change. This will include efforts to undo the Trump administration’s relaxation of regulations on the extraction and burning of fossil fuels and fuel efficiency of cars and trucks.

Taxes — Biden hopes to repeal a huge corporate tax cut passed during the Trump years, which cut the business rate from 35% to 21%, and to raise income taxes on the wealthiest Americans. He has promised that taxes on people earning less than $400,000 will not rise.

Immigration — After four years of an administration that was openly hostile to many forms of immigration to the United States, the Biden administration is proposing sweeping immigration reform that would create a pathway to citizenship for more than 11 million undocumented immigrants. It would also permanently install protections for people brought to the country illegally as children, and would move to reunite children and parents separated at the border under a since-shelved Trump administration program.

Infrastructure and green technology — Biden has promised to jump-start long-stalled efforts to overhaul the country’s crumbling infrastructure, beginning with what he sees as a years-long investment of some $2 trillion in the nation’s roads, bridges, transit systems, and more. He would couple that with investment in green technology, including electric cars, sustainable agriculture, and renewable energy.

Mahaffee, of the Center for the Study of the Presidency and Congress, said Biden should be able to count on at least some cooperation from Congress in the early days of his administration.

“The consensus in Congress, even with a 50-50 Senate, is that action does need to be taken on the economy,” he said. “The slow rollout of the vaccine is visible, the continued job losses — that focuses lawmakers.”

But Mahaffee predicted the Biden administration will press for big achievements outside the area of immediate economic relief as a means of countering a false but persistent claim by President Trump and his most ardent supporters that the recent election was somehow fraudulent and that Biden’s presidency is illegitimate.

“The challenge for President Biden will be this narrative of illegitimacy that he will face outside Washington, coming from Trump supporters, perhaps the ex-president himself, and others in the media on the right,” he said. “I think they’ll feel the need to act big to show results and progress to change that narrative in some ways.”