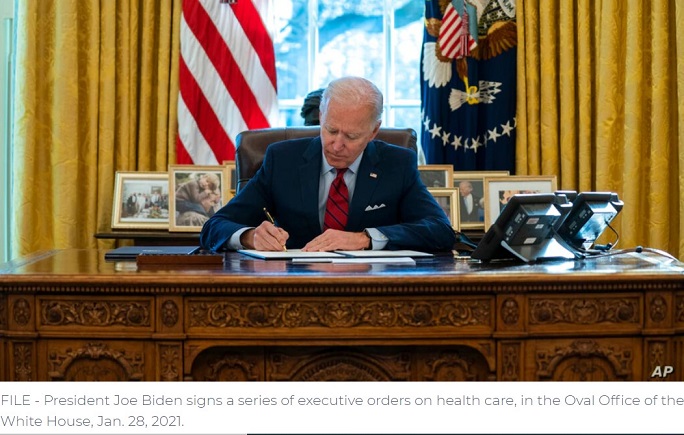 WASHINGTON – U.S. President Joe Biden is hosting 10 Republican senators for talks Monday about a new round of coronavirus economic relief, but the U.S. leader and the lawmakers are far apart on how much should be spent.

The Democratic president, in the second week of his four-year term, has proposed a $1.9 trillion package but the opposition lawmakers on Monday called for a $618 billion deal.

The White House meeting comes after the Republicans sent a letter to Biden, urging him Sunday to negotiate on a new relief deal rather than trying to get his approved solely with the votes of congressional Democrats.

Ahead of the meeting, White House press secretary Jen Psaki told reporters that while the president is willing to negotiate, “Clearly, he thinks the package size needs to be closer to what he proposed than smaller.”

Biden said on Twitter, “Hardworking Americans need help, and they need it now. That’s why I’m calling on Congress to immediately pass my American Rescue Plan that will deliver direct relief, extend unemployment insurance, help folks put food on the table and keep a roof over their heads, and more.”

Both Biden and the Republicans are calling for $160 billion for testing, vaccines and personal protective equipment on top of hundreds of billions that were approved last year as the virus swept into the United States.

But the president and the lawmakers diverge on other aid proposals. Biden wants to increase $300 weekly unemployment insurance payments from the federal government to $400 and extend them through September, while the Republicans want to keep the payments at the current $300 and only through July.

Biden has proposed sending most Americans, all but the biggest wage earners, $1,400 checks on top of the $600 checks that were approved by former President Donald Trump in late December. The Republicans are supporting $1,000 checks for lower-income Americans.

Biden agreed to meet with the Republicans as Democratic congressional leaders mapped plans to move quickly this week to adopt Biden’s plan with only the votes of Democrats that control both chambers of Congress.

The Republican senators, led by Senator Susan Collins of Maine, told Biden in a letter on Sunday that they “recognize your calls for unity and want to work in good faith with your administration to meet the health, economic, and societal challenges of the COVID crisis.”

Whether Biden and the lawmakers agree to a deal is uncertain.

Senate Democratic Leader Chuck Schumer complained that the Republicans are not starting near Biden’s spending proposal.

“We cannot do the mistake of 2009 (during the Great Recession) where they whittled down the program so that the amount of relief was so small that the recession lasted four or five years,” Schumer told the New York Daily News on Sunday.

But Republicans say Biden will get his administration off to a bad start if he doesn’t compromise with them on coronavirus legislation.

“In the spirit of bipartisanship and unity, we have developed a COVID-19 relief framework that builds on prior COVID assistance laws, all of which passed with bipartisan support,” the Republican senators wrote in their letter to Biden. “Our proposal reflects many of your stated priorities, and with your support, we believe that this plan could be approved quickly by Congress with bipartisan support.”

Biden press secretary Psaki said in a statement, “With the virus posing a grave threat to the country, and economic conditions grim for so many, the need for action is urgent, and the scale of what must be done is large. As leading economists have said, the danger now is not in doing too much: it is in doing too little. Americans of both parties are looking to their leaders to meet the moment.”

Brian Deese, the director of Biden’s National Economic Council, told CNN on Sunday that the president’s proposal is “calibrated to the economic crisis that we face,” but that Biden would look at the Republican proposal.

Deese said Biden is “uncompromising when it comes to the speed we need to act at to address this crisis,” including a reeling economy, a sluggish rollout of coronavirus vaccinations across the country and a steadily increasing U.S. coronavirus death toll. It now stands at more than 441,000, according to Johns Hopkins University.

Biden has said Democrats will push through their version of the relief package on a party line vote in Congress if they need to rather than engage in protracted negotiations.

Deese declined to say what overall amount Biden would be willing to agree to.

But he said the president was willing to target the cash stipends so that money does not go to bigger wage earners.

“We want to get cash into the pockets of people who need it the most,” Deese said.

“The immediate focus,” he said, “is putting a floor under the economic crisis.”

Senator Rob Portman of Ohio, one of the 10 Republicans calling for a compromise with Biden, said, “Let’s focus on those who are struggling.”

He said it was “not in the interest of the Democratic Party to ram through” its version of the relief bill. “If you can’t find bipartisanship on COVID-19, I don’t know where you can,” Portman said. COVID-19 is the illness caused by the coronavirus