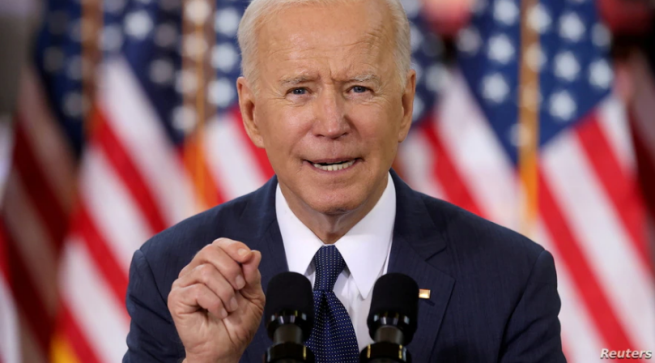 European leaders and other American allies say President Joe Biden has done much in his first 100 days in the White House to start rebuilding confidence in U.S. leadership.

But while agreeing with his key foreign policy goals, including confronting the global rise of authoritarianism, they are still taking the measure of the Biden administration — as are America’s foes, say analysts and diplomats.

They say the 78-year-old Biden has already shown how a switch in the Oval Office can prompt significant political change with a promise of more to come, not only in the United States but across the globe.

Observers in Europe and Asia praise the U.S. leader for his emphasis on multilateral cooperation and the need for a coordinated global effort to tackle climate change. The fresh emphasis on the importance of alliances is a sharp break with Biden’s immediate predecessor, Donald Trump, they note.

Biden has “reset the global agenda by strengthening international cooperation, shifting away from a unilateral approach to leverage the strength of allies and global institutions to see tangible outcomes,” says Siddharth Tiwari, chief representative for Asia at the Bank for International Settlements. He was speaking during an online discussion hosted by Britain’s Financial Times and the Japanese business newspaper Nihon Keizai Shimbun.

In Europe, too, high marks are being given to Biden with some commentators suggesting that despite his age, Biden may turn into a transformative leader. “Politics throws up two sorts of leader,” according to influential British newspaper columnist Philip Stephens. “There are those forever reaching for an umbrella and others, far fewer in number, who set out to change the weather.” He says, “The task of rediscovering the power of agency has fallen to the 78-year-old who has moved into the White House.”

Stephens and others highlight the steps Biden is taking at home to reassert the power of government and to try to heal what Trump critics said was America’s “uncivil” political war with an economic expansion plan that has drawn comparisons with Franklin Roosevelt’s New Deal of the 1930s. A $1.9 trillion economic stimulus measure has already been passed by Congress and the White House is advocating for a massive infrastructure and education package that may help to calm the socioeconomic anxieties of white working-class voters who fled the Democratic Party and backed the populist Trump.

Many analysts say America’s economic performance will be crucial if the U.S. is to restore its global leadership. “Unless the U.S. economy recovers, then I think the U.S. diplomacy won’t be able to recover from the Trump era,” according to Richard McGregor of Australia’s Lowy Institute research institution.

Economic recovery may help Biden to repair some of America’s divisions, according to Georg Löfflmann, an academic at Britain’s University of Warwick. But he notes: “President Joe Biden faces an immense task to bring together a deeply divided nation that remains at odds over key issues from immigration to combating climate change and the enduring legacy of slavery and racism in the United States.”

Domestic success will beget greater foreign policy success, observers acknowledge. The two are linked. “In his first 100 days, U.S. President Joe Biden has taken laudable steps to address climate change including establishing a ‘whole of government’ approach, rejoining the Paris Agreement and embedding climate experts to take action across the administration,” according to academics Antony Froggatt and Rebecca Peters.

Writing in a paper for Britain’s Chatham House policy institute, the pair caution, though, that the “real challenge looms.” They say, “In order for the U.S. to affirm its legitimacy on climate in a politically divided landscape at home, Biden needs to simultaneously prioritize domestic policy action, while rebuilding international alliances to show that his administration can deliver on its long-term commitments.”

While policymakers on both sides of the Atlantic are determined to repair frayed relations and steady democracies roiled by unprecedented domestic political turmoil and challenged by authoritarian powers, there is a recognition that the road ahead will be tricky to navigate. There has been quick agreement on a range of issues with both Brussels and Washington eager for closer collaboration.

Significant differences remain. The Biden team is encountering some of the same headwinds that contributed to the straining of Euro-Atlantic ties, first during Barack Obama’s tenure in the Oval Office, and then to a much greater degree under Trump, who identified Europe as an economic adversary and complained about NATO’s purpose.

All EU national governments have welcomed Biden’s aim of revitalizing U.S.-European ties and are relieved the adversarial language has gone. Washington, however, is now facing an EU that’s turning inward, with the bloc focused on protecting its post-pandemic market and protecting its industrial champions, analysts say, and determined to become more of a global player in its own right. All fo this is likely to aggravate some trade and geopolitical frictions.

The post-Second World War transatlantic consensus is also being complicated by splits within the bloc over the best ways to handle the rising power of Communist China and how to manage a revanchist (retaliatory) Russia, they add. That is placing some populist European governments in an especially awkward position — including Hungary. Hungarian Prime Minister Viktor Orban has been accused of hedging his bets between the West and the autocracies of Russia and China.

“In the transactional world of Trumpist foreign policy, it was perfectly okay for many European leaders such as Viktor Orban to do this limbo between Eastern autocracies and Western democracies. Right now, they have to choose sides,” Katalin Cseh, a liberal Hungarian politician, said during an online exchange between EU lawmakers discussing Biden’s first 100 days. The discussion was hosted by Visegrad Insight, a Warsaw-based debate platform.

But Biden’s more confrontational strategy toward China poses problems also for Europe as a whole, according to the discussion’s participants. “Our challenge is to maintain trade with China while at the same time maintaining our alliance with the United States. It will not be easy,” said Radosław Sikorski, a European lawmaker and former Polish foreign minister.

Overload is also seen as a risk ahead for the Biden administration with a daunting number of foreign policy challenges to overcome — not least curbing the spread of the coronavirus and rolling out vaccinations. So far, the Biden administration is given high marks for its blending of clear-eyed pragmatism with idealism in how it is handling Russia, China and Iran, offering both sticks and carrots.

“Mr. Biden is attempting a two-track policy, trying at once to resist and relate to such regimes: to constrain their territorial ambitions and discourage their human-rights abuses and transnational meddling, while working with them where their interests might overlap with America’s,” appraised Britain’s Economist magazine.