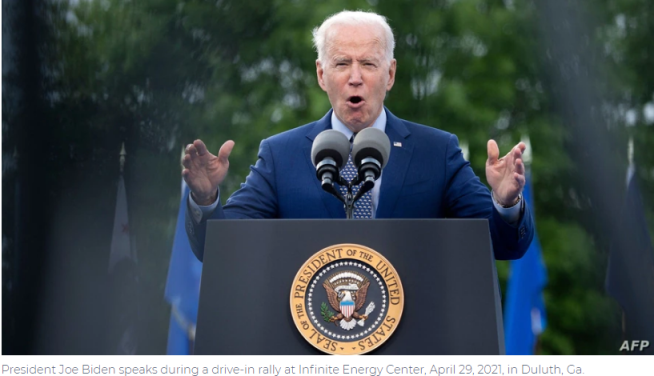 WASHINGTON – Marking his 100th day as president of the United States, Joe Biden said Thursday that he had never been more optimistic about the future of America, because the country “is on the move again. We’re choosing hope over fear, truth over lies, light over darkness.”

Biden spoke at a drive-in political rally near Atlanta, funded by the Democratic National Committee.

“You’re proving democracy can deliver for the people,” the president said to the approval of the honking horns of the 315 vehicles in attendance on the grounds of the Infinite Energy Center in Duluth, northeast of Atlanta.

The U.S. Senate runoffs in January in the state of Georgia, with victories by Raphael Warnock and Jon Ossoff, gave Biden’s Democrats unified control of the federal government.

The president last month used the 50 Democratic seats in the Senate to get approval for his $1.9 trillion American Rescue Plan, although no Republicans voted for it. The legislation also won approval in the House, also controlled by the Democrats.

Early in the president’s remarks on Thursday, he paused when a few demonstrators voiced concerns about detentions by U.S. Immigration and Customs Enforcement, shouting, “Our families are dying!”

The president then returned to reminding the audience he had kept his promise to get coronavirus vaccines into American arms and to deliver relief to millions of citizens.

Biden’s victory lap came less than 24 hours after he delivered his first speech to a joint session of Congress in which he promoted proposals to promote job growth, modernize infrastructure, and assist families with child care and education that would cost trillions of dollars.

A U.S. president’s first 100 days has become a notable milestone since Franklin D. Roosevelt took office in 1933 during the depths of the Great Depression.

The vice president said that when she and Biden took office, “More than 10 million Americans were out of work. Schools were closed. Businesses were closed. And beyond the pandemic, our democracy was under assault. And our Capitol had just been attacked by insurgents.”

Little of what the Biden-Harris team has achieved in its first 100 days has impressed the Republicans’ leader in the Senate.

The Democrats’ agenda is “an attempt to continue dragging a divided country farther and faster to the left,” according to Senator Mitch McConnell.

“Our president will not secure a lasting legacy through go-it-alone radicalism,” added McConnell in a statement to mark Biden’s 100th day in office. “He won’t get much done that way. It won’t be good for the country. And whatever the Democrats do get done through partisan brute force will be fragile.”