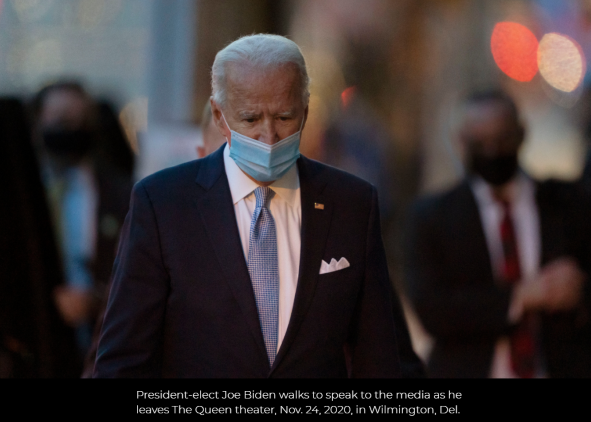 U.S. President-elect Joe Biden is set to discuss the coronavirus pandemic and the holiday season in an address Wednesday.

The speech comes a day before the U.S. Thanksgiving holiday, a time when millions of Americans typically gather with family, many traveling in order to do so.  But this year, with COVID-19 infections spiking across the country, the federal government has urged people to stay home.

Biden’s transition office said he will “discuss the shared sacrifices Americans are making this holiday season and say that we can and will get through the current crisis together.”

On Tuesday, Biden declared that the United States is “ready to lead the world, not retreat from it,” signaling a sharp pivot from outgoing President Donald Trump’s “America First” credo over the last four years.

As he prepares to assume office on January 20, Biden said the country is “ready to confront our adversaries, not reject our allies. And ready to stand up for our values.”

From his transition center in his hometown of Wilmington, Delaware, the president-elect introduced his top foreign policy and national security officials.

“They embody my core belief that America is strongest when it works with its allies,” he said. “That’s how we truly keep America safe without engaging in needless military conflicts, and our adversaries in check and terrorists at bay.”

Biden’s selections, perhaps especially Antony Blinken for secretary of state, have a globalist viewpoint distinctly different from that of the Trump administration.

Biden said, “America leads not only by the example of our power, but by the power of our example.”

He said the officials he named “will not only repair, they will reimagine American foreign policy and national security for the next generation. And they will tell me what I need to know, not what I want to know.”

Aside from Blinken, Biden named former Secretary of State John Kerry to a new position as special presidential envoy for climate, while giving him a seat on the National Security Council. It was a reflection, the Biden transition said, of the incoming president’s commitment to addressing climate change as an urgent national security priority.

Biden selected Alejandro Mayorkas as head of the Department of Homeland Security. A Cuban American lawyer, he is a former deputy secretary at the agency. If confirmed by the Senate, he would be its first Latino and immigrant leader.

Biden picked former Ambassador Linda Thomas-Greenfield, an African American woman and a 35-year veteran of the U.S. Foreign Service who has served on four continents, as U.S. envoy to the United Nations. Biden elevated her role to a seat in his Cabinet, a rank past presidents have also occasionally given the high-profile position.

The president-elect named another woman, Avril Haines, as director of national intelligence. She is a former deputy director of the Central Intelligence Agency and a deputy national security adviser. She will be the first woman to lead the U.S. intelligence community if confirmed.

The president-elect and the newly named officials all wore face masks when they were not speaking, a pointed reminder to Americans that the country is facing a surging number of new coronavirus cases. The United States is moving to approve three vaccines that could begin to control the pandemic, but most Americans will not be able to get the shots until well into 2021.

“To the American people, this team will make us proud to be Americans,” Biden said, adding that the group will bring “experience and leadership, fresh thinking and perspective, and an unrelenting belief in the promise of America.”

Biden also plans to name Janet Yellen, the 74-year-old former chair of the Federal Reserve, the country’s central bank, as his Treasury secretary. If confirmed, she would be the first woman to lead the department.

Biden has yet to decide other Cabinet appointments. He is set to become the 46th U.S. president, and at 78, its oldest.

Monday night, he acquiesced in his administration making an “ascertainment” that Biden was the likely winner, allowing Biden’s transition to move forward.

But he did not concede and is continuing to pursue lawsuit challenges to the outcome of the election.