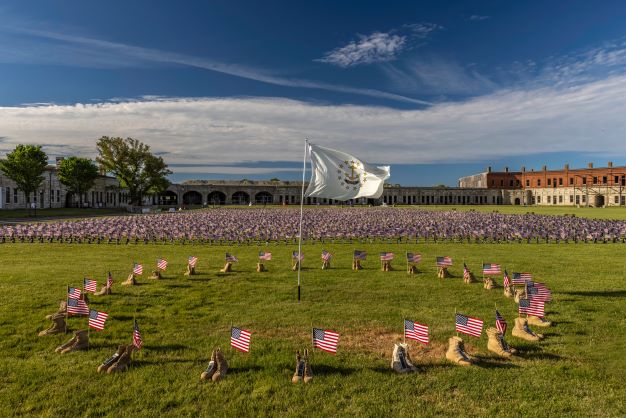 Operation Stand Down RI is excited for the return of the full display of Boots on the Ground for Heroes Memorial on Memorial Day weekend (May 27-30). Volunteers will converge at Fort Adams State Park on 24 May 2022 at 9 a.m. to set up the Memorial. On Friday, May 27th, starting at 8 a.m. the Memorial will open to the public. The Memorial will be opened from May 27, 28, and 29 from 8 am to 8 p.m. and on Memorial Day, May 30 from 8 a.m. to 6 p.m. There will be a special ceremony for Rhode Island’s Gold Star Families to place the boots representing their fallen loved one’s at 6:30 p.m. on May 28th.

At 5-6 p.m. on May 28th, Rhode Island National Guard’s 88th Army Band will play a Patriotic Concert. The concert is free of charge and those looking to attend are encouraged to bring lawn chairs and picnic blankets. The concert will feature Patriotic Selections from the band.
In addition to the Boots on the Ground for Heroes Memorial the event will also feature the Invisible Scars of War Monument. This monument recognizes the pain and sacrifices of those Service Members who have succumbed to the invisible scars of war such as depression and PTSD and ultimately committed suicide. This monument is the first of its kind in R.I. and it helps recognize the other effects of war.
The Boots on the Ground for Heroes Memorial was launched by OSDRI in 2015. The memorial depicts 7,026 boots adorned with flags and name placards representing the lives of the of the U.S. service members killed in action post 9-11 in the Global War on Terror. The exhibition has been seen by thousands of visitors since its inception in 2015. Every fallen service member is included in the memorial; service members are alphabetized by state allowing individuals to locate loved ones at the memorial. The Memorial continues to grow each year the war continues. In 2021, the 13 boots of the U.S. Service Members killed during with withdrawal from Afghanistan were added.
The first three years the Memorial was displayed at Roger Williams Park in Providence. In 2019, the memorial relocated to its new home inside Fort Adams State Park in Newport.
“Each year this Memorial stands proud honoring our fallen and reminding the public about the true cost of freedom. It also serves as a place for those who knew and loved the individuals depicted in the boots to come spend time with them, heal, and remember their loved one” said Dee DeQuattro, Founder of the Boots on the Ground for Heroes Memorial.