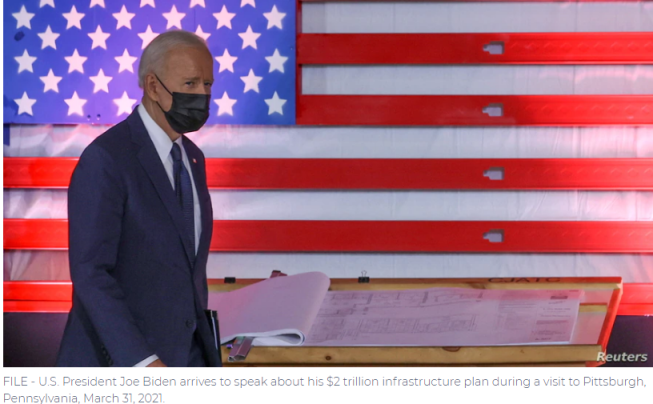 WASHINGTON – President Joe Biden travels to Lake Charles, Louisiana, on Thursday to continue pushing his proposed $2.3 trillion American Jobs Plan, commonly referred to as his infrastructure bill. The proposal is just one of three major spending initiatives the White House began pushing in the first 100 days of his administration, the others being a $1.9 trillion American Rescue Plan, passed by Congress in March, and the $1.8 trillion American Families Plan, proposed last month.

Combined, the three programs with a total price tag of $6 trillion would radically reshape the relationship between the federal government and its citizens.

The programs are so large and multifaceted that it can be difficult to keep them straight. The infrastructure bill, for example, contains money not just for traditional infrastructure, like roads and bridges, but also for upgrading public schools and providing for the care of elderly and disabled people.

Below is a breakdown of the actual and proposed spending covered by each program. While many liberal Democrats are praising Biden’s government spending spree, Republicans and even some moderate Democrats are concerned about the administration helping to amass record debt. However, under Biden’s plan, $4.1 trillion of the new spending would be offset with tax increases on wealthy Americans and corporations.

Commonly known as the “stimulus” package, this $1.9 trillion plan is the only one of the three to have been enacted so far. It contains dozens of elements, but some of the most significant are:

Unlike the Rescue Plan, which was passed by Congress relatively quickly, albeit without any Republican votes, the American Jobs Plan is still being debated by lawmakers at some length. Many are troubled by the administration’s expansive definition of the word “infrastructure.” At $2.3 trillion, it is the largest of Biden’s three major proposals, and like the others, it divides that spending across dozens of initiatives. Some of the largest are:

Funding for home- and community-based care for the elderly and disabled. $400 billion

Assistance for manufacturers and small businesses, including access to financing and clean energy investment. $300 billion

The third of Biden’s major initiatives, the $1.8 trillion American Families Plan, is aimed at expanding education, improving access to childcare, and reducing child poverty. In addition to providing four additional years of guaranteed education (two years of pre-school and two years of community college), it would extend programs put in place by the American Rescue Plan and substantially increase spending on childcare for working parents.

Extend the refundable child tax credit from the American Rescue Plan through 2025. $400 billion

Invest in affordable childcare facilities and training for caregivers. $225 billion

Invest in programs to encourage student retention at community colleges serving the most disadvantaged students. $62 billion

Provide two years of tuition for students at colleges and universities serving black, tribal, and other minority students. (Limited to families earning less than $125,000 annually.) $39 billion