Heating is the second-leading cause of U.S. home fires, with four out of five deaths (81 percent) involving stationary or portable heaters

The fire that occurred in Bronx, N.Y. on January 9 represents the second most deadly U.S. home fire in nearly 40 years; it comes on the heels of the deadly incident that occurred in Philadelphia just four days prior. Approximately 100 miles away from each other, the two fires and the tragic death tolls incurred place them both in the top 10 residential fires since 1980.
These incidents present a stark contrast to the fire progress that has been documented in recent decades and is reflected in last year’s Fire Safety in the United States report.
U.S. home heating equipment fires
According to news reports, a space heater was responsible for the start of yesterday’s tragic fire. Heating equipment is the second-leading cause of U.S. home fires and the third-leading cause of home fire deaths and injuries.
Overall, U.S. fire departments responded to an estimated average of 48,530 fires involving heating equipment per year in 2014-2018, accounting for 14 percent of all reported home fires and 19 percent of home fire deaths. These fires resulted in an annual average of 500 civilian deaths, 1,350 civilian injuries, and $1.1 billion in direct property damage.
Space heaters are the type of heating equipment most often involved in home heating fires. Between 2014 and 2018, space heaters annually accounted for more than two out of five heating fires and the majority of heating fire deaths (81 percent) and injuries (80 percent).
The NFPA U.S. Home Heating Fires report provides more data on when, where, and how home heating fires happen.
The NFPA home heating safety tips sheet offers guidelines for safely heating homes during the winter months. Here are some highlights: 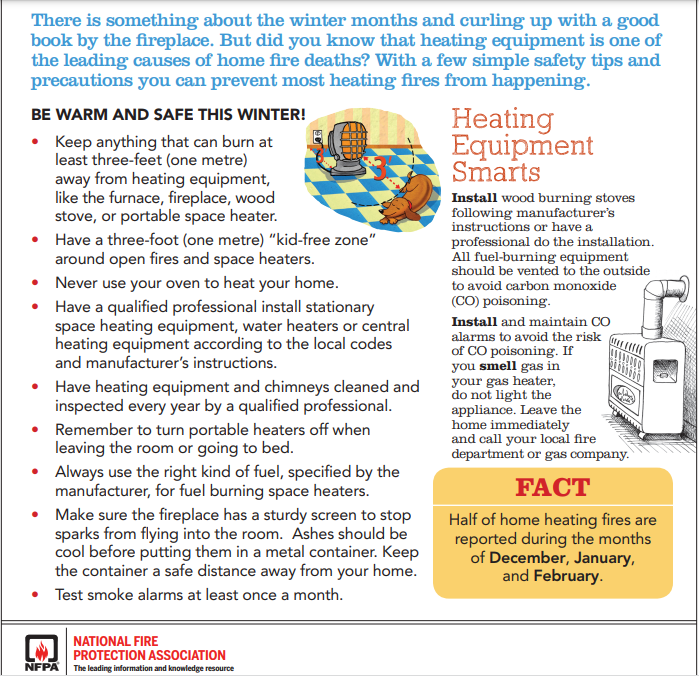