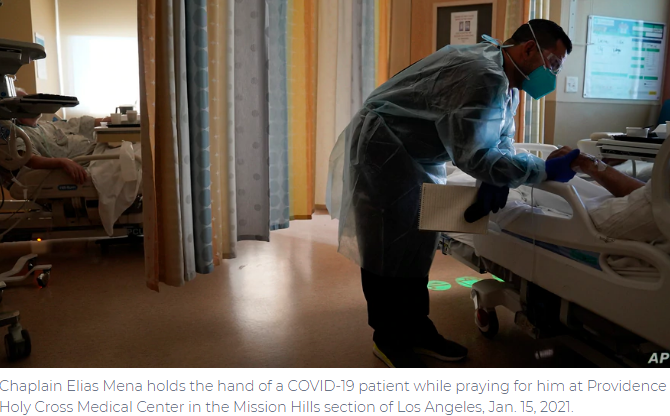 As of Tuesday, the western state, home to 40 million residents, has 3,015,644 confirmed infections, including 33,724 deaths, according to Johns Hopkins University Coronavirus Resource Center.

According to the Associated Press, it took California 292 days from the first confirmed infection on January 25 to November 11 of last year to reach 1 million infections.  The state has since undergone a dramatic surge of new infections that has pushed health care systems to the verge of collapse, recording 2 million cases by Christmas Eve — a space of 44 days — and reaching the 3 million mark in less than 30 days.

The state’s epidemiologist Sunday recommended that providers stop using a batch of the Moderna vaccine after some recipients had to seek treatment for  possible severe allergic reactions.

The incoming administration of U.S. President-elect Joe Biden will reverse a decision by President Donald Trump to lift coronavirus-related travel bans on most non-U.S. citizens arriving from much of Europe and Brazil, beginning January 26.

“This action is the best way to continue protecting Americans from COVID-19 while enabling travel to resume safely,” Trump said in a statement released by the White House.

However, President-elect Joe Biden’s press secretary, Jen Psaki, responded a few minutes later on Twitter, saying: “On the advice of our medical team, the administration does not intend to lift these restrictions on 1/26. In fact, we plan to strengthen public health measures around international travel in order to further mitigate the spread of COVID-19.”

New guidelines by the U.S. Centers for Disease Control and Prevention, set to take effect January 26, will require all air passengers entering the U.S. to provide a negative COVID-19 test before boarding their flight.

Also Monday, an independent panel reviewing the global handling of the COVID-19 pandemic criticized both the World Health Organization and China for their response to the virus.

The panel of experts led by former New Zealand Prime Minister Helen Clark and former Liberian President Ellen Johnson Sirleaf said in an interim report that WHO should have declared an international emergency sooner than it did on January 30.

The panel also said China could have applied public health measures more strongly in January. The panel will present its completed report in May.

Experts in South Africa say a new variant of novel coronavirus first detected in that country late last year is 50% more contagious than the original version.  The experts say the new strain, dubbed 501Y.V2, binds stronger and more readily to human cells. The South Africa strain is one of several new strains discovered around the world that has aggravated the spread of the virus, which now stands at just over 95.6 million total infections worldwide, including over 2 million deaths.

In Japan, Prime Minister Yoshihide Suga vowed Monday to forge ahead with preparations to hold the Tokyo Olympics this summer, despite a surge in coronavirus infections in the country.

“We will press ahead with preparations, with determination of building watertight anti-infection measures and holding an event that can bring hope and courage to the world,” Suga said in a speech to Parliament.

A recent surge in cases in Japan has forced the government to close its borders to nonresident foreigners and to declare a state of emergency in the capital, Tokyo.

Recent media polls in Japan show about 80% of the Japanese public think the Olympics will not or should not be held this year.

The Tokyo Olympics have been postponed once because of the pandemic, having originally been scheduled for summer 2020.