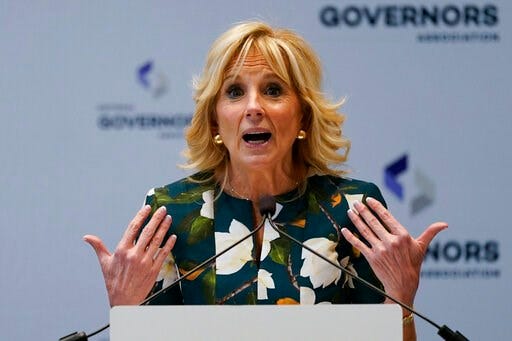 US First Lady Jill Biden meets with the nation’s spouses of governors at the Kennedy Center in Washington, DC

Jill Biden on Monday urged the spouses of the nation’s governors to continue working together and with her on issues she said transcend politics, such as her efforts to help military families and support research into a cure for cancer.

The first lady expressed hope that the connections she and the spouses made as the National Governors Association resumed its annual winter meeting in Washington “will continue well beyond this weekend.”

It was the first interaction of the Biden White House with all the state chief executives. Governors met virtually last winter due to COVID-19.

“Why can’t we stay in touch and talk to each other and see where we can find common ground and bring people together?” said Jill Biden.

The first lady welcomed the spouses to the White House on Saturday to pack gift boxes for National Guard soldiers, and on Sunday she accompanied President Biden to George Washington’s home in Mount Vernon, Virginia, for a gala dinner. with the governors and their husbands and wives.

On Monday, the first lady and Doug Emhoff, who is married to Vice President Kamala Harris, entertained the spouses with musical and ballet performances at the Kennedy Center.

She said many of the spouses had told her they wanted to hold gift box-wrapping events for soldiers in their states.

“When they do, call me,” the first lady said.

Emhoff emphasized the importance of spouses sharing their experiences.

He said he and other male spouses “became a bit of a friend” after his wife was elected to the US Senate, and said the relationships “helped me a lot when I first came to DC.” In his new role as second gentleman, Emhoff is now chairman of the Senate spouses caucus.