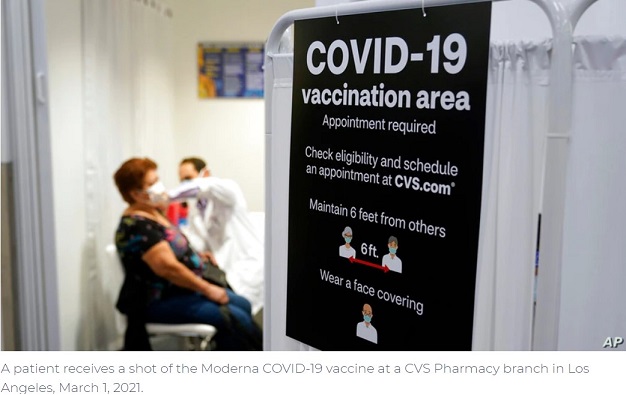 “We need to have a stern warning for all of us that this virus will rebound if we let it,” Maria Van Kerkhove, WHO technical lead for COVID-19, said Monday at a news briefing at the agency’s headquarters in Geneva.

WHO Director-General Tedros Adhanom Ghebreyesus said the rise in cases occurred in four regions: the Americas, the eastern Mediterranean, Europe and Southeast Asia. He said the development was “disappointing but not surprising” and said part of the spike appeared to be the result of the “relaxing of public health measures.”

Michael Ryan, director of WHO’s emergencies program, said, “Right now, the virus is very much in control” and it was “unrealistic” to think the pandemic might be stopped by the end of the year.

The warnings come after a sharp fall of coronavirus cases and deaths in many parts of the world, which along with vaccine developments, had led to hopes that the spread of the coronavirus would continue on a downward trend.

In the United States, health officials are warning that another surge in cases could be on the horizon, as newer and more infectious variants of the coronavirus that causes COVID-19 are growing more frequent.

The new upward trend in cases comes as most states are easing coronavirus restrictions.

In California, Gov. Gavin Newsom and state legislative leaders announced an agreement for most public schoolchildren to be back in classrooms by the end of March.

Thousands of students in Chicago, Illinois, returned to classrooms Monday after more than a year of remote learning. Students in kindergarten through fifth grade were able to return to school this week, with middle school students scheduled to return next week.

French officials announced Monday that there will be no relaxing of measures aimed at curbing the pandemic, including a nighttime curfew, for the next four to six weeks.

Health Minister Olivier Veran said bars, restaurants and museums will continue to be closed, and that he hoped the country would not have to increase restrictions to fight the virus.

Slovakia said Monday it will receive 2 million doses of Russia’s Sputnik V coronavirus vaccine. Slovakia is the second European Union nation after Hungary to use the Russian vaccine, which has not been approved by the European Medicines Agency, the EU’s drug regulator.

The European Union’s executive arm said Monday it will propose rules for a passport to allow those who have been vaccinated or recently tested for COVID-19 to travel for work or tourism throughout the region.

From her Twitter account, EU Commission President Ursula Von der Leyen said legislation will be presented later this month for the digital pass, which she called a “green pass,” that hopefully could help EU member nations rebuild their tourism industries.

In Ivory Coast, health officials began inoculating people with vaccine doses imported from the COVAX initiative, formed to ensure fair access to vaccines by low- and middle-income countries. Ivory Coast received more than half a million doses of the vaccine developed by AstraZeneca and Oxford from COVAX on Friday.

An international study published Monday showed an upward trend in support for receiving COVID-19 vaccines in several countries compared to the end of 2020, with the biggest increase in Britain and Sweden.

The poll indicated 89% of Britons were in favor of getting vaccinated now, compared to 65% in September 2020.

In Sweden, 76% of those interviewed were in favor of inoculation, compared to 51% last September.

The study showed that 68% of men worldwide support vaccination; the ratio is lower among women, at 55%.

Older and middle-aged people have become more likely to get a vaccine since September, the survey found.

The study also showed that 75% of Britons are pleased with the pace of the vaccination campaign in the country, but the ratio drops in the other countries surveyed to 32% in the U.S., 22% in France and 20% in Sweden.

Kekst CNC conducted the survey in mid-February over 10 days, with samples of 1,000 adults in each country and a margin of error of 3.3% for all participating counties.

Saturday, the U.S. Food and Drug Administration formally authorized the use of the Johnson & Johnson vaccine. Nearly 4 million doses of the vaccine will be distributed and available as early as Tuesday morning, according to a senior administration official.

This vaccine, the third to be approved for use in the United States, will be distributed to states, tribes and territories proportional to their populations — the same way the Pfizer-BioNTech and Moderna vaccines have been distributed.

The United States continues to lead the world in the number of coronavirus infections with 28.6 million, according to the Johns Hopkins Coronavirus Resource Center. India follows with more than 11.1 million infections, and Brazil with more than 10.5 million.