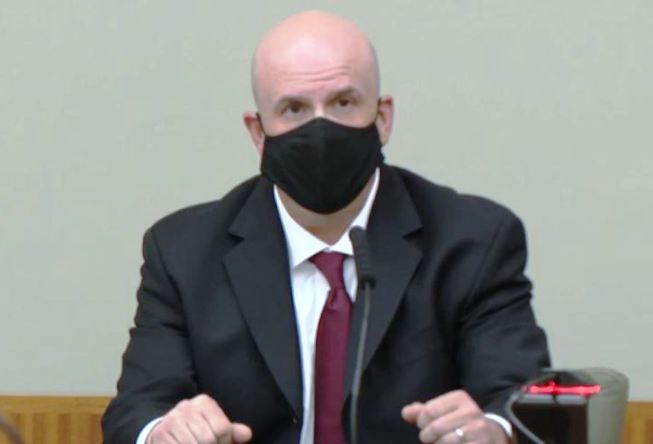 PROVIDENCE, R.I. – Attorney General Peter F. Neronha announced today that a Cranston police officer was found guilty in 3rd Division District Court of simple assault, stemming from a March 5, 2020 incident at the Cranston Police Department involving the use of force against an individual in custody.

At today’s hearing, the court gave Officer Leonard a one-year suspended sentence with probation and issued a No Contact Order between him and the victim.

Prosecutors for the State recommended to the court that Officer Leonard be sentenced to one year at the Adult Correctional Institutions (ACI) with 90 days to serve and the balance of the sentence suspended with probation and a No Contact Order.

“I am grateful for the Court’s guilty verdict today, which was plainly warranted based on the evidence presented at trial” said Attorney General Neronha. “Police may use force in exercising their duty to protect the public, but that use of force must be reasonable and necessary under the circumstances. As the Court found, there was no need to use force here. The defendant invited conflict, apparently believing that his position as a police officer would shield him from the consequences of his actions. He was mistaken.

“Police officers have a difficult and often thankless job,” continued Attorney General Neronha. “They work hard to protect the public, and the vast majority serve honorably and well.  However, when an officer fails to uphold his oath and uses excessive force against a member of the public, it is imperative that we take strong action to hold them appropriately accountable for such misconduct. I am grateful to the prosecution team, including the Rhode Island State Police, for their diligence in ensuring a successful prosecution in this important case. I am also grateful to Cranston Police Chief Michael Winquist for immediately recognizing the defendant’s misconduct at the time it occurred and bringing that misconduct to the attention of this Office and the State Police.”

At trial, the State proved beyond a reasonable doubt that during the early evening of March 5, 2020, Officer Leonard punched and kneed Gian Mattiello while Mattiello was in custody at the Cranston Police Department.

Officer Leonard gave notice to the court that he will appeal the verdict in Rhode Island District Court.