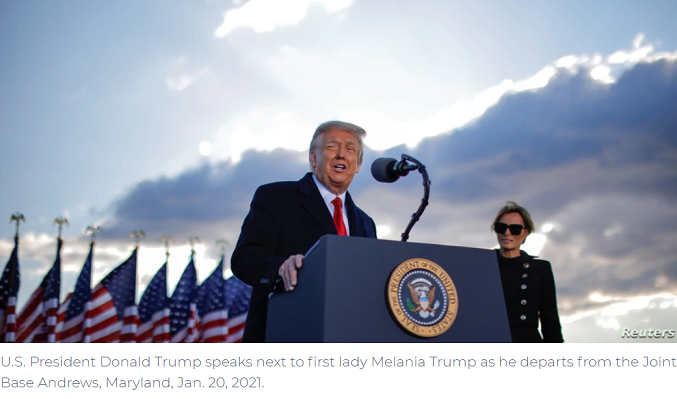 Donald Trump boarded Air Force One for a final time as U.S. president Wednesday, headed for the southern state of Florida at the close of his four-year term.

As he left the White House Wednesday morning, Trump said it was “the honor of a lifetime.”

Following a short helicopter flight to Joint Base Andrews, he received a sendoff ceremony with a red carpet, military band, a 21-gun salute and crowd of about 200 guests in attendance.

“We’ve had an amazing four years, we’ve accomplished a lot,” Trump said before boarding Air Force One.  He listed what he saw as his greatest accomplishments, including rebuilding the military.

Trump also wished the next administration success, without mentioning the name of his successor, Democrat Joe Biden.

Around the same Trump’ flight lands, Biden will be sworn in as the country’s new leader, with Trump breaking decades of tradition by not attending the inauguration ceremony.

“I want you to know that the movement we started is only just beginning,” he said in a farewell video message released Tuesday.  “There’s never been anything like it.  The belief that a nation must serve its citizens will not dwindle but instead only grow stronger by the day.”

Trump leaves office under the shadow of becoming the first president in U.S. history to be impeached twice, and an unclear start date for a Senate trial on charges he incited a mob of his supporters to storm the U.S. Capitol two weeks ago.

He briefly referenced the assault Tuesday, saying Americans “were horrified” and that political violence “can never be tolerated.”

Trump also listed a number of foreign policy initiatives his administration carried out, including withdrawing from the Trans-Pacific Partnership trade deal and the Paris Climate Accord, negotiating a new trade deal with neighboring Canada and Mexico, and applying tariffs on goods from China.

“We reclaimed our sovereignty by standing up for America at the United Nations and withdrawing from the one-sided global deals that never served our interests,” Trump said.  “And NATO countries are now paying hundreds of billions of dollars more than when I arrived just a few years ago.  It was very unfair.”

He called being president an “extraordinary privilege.”

In some of his final acts in office, Trump issued pardons and sentence commutations for more than 140 people, including his former campaign chief Steve Bannon.

Trump also rescinded an executive order from the early days of his term that banned officials in his administration from lobbying the government for five years after leaving those jobs, or from ever engaging in activities that would require the former official from registering as a foreign agent.  The measure was part of his pledge to “drain the swamp,” or root out corruption in Washington.