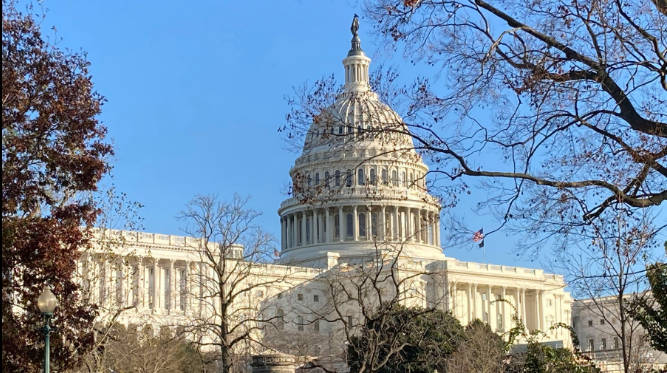 WASHINGTON – More than 100 Republican lawmakers in the U.S. House of Representatives and a dozen senators say they will join an almost assuredly futile effort Wednesday to try to block certification of the Electoral College vote showing that Democrat Joe Biden defeated President Donald Trump in the November election.

The certification of the 306-232 Electoral College vote favoring Biden, a fixture on the Washington political scene for nearly a half century, is the last step before he is set to be inaugurated as the country’s 46th president on January 20.

Both chambers of Congress would need to uphold the challenges to Biden’s victory for the election outcome to be upended. But Democrats narrowly control the House and are certain to certify Biden’s win, while the Democratic minority in the Senate, along with some Republicans who have acknowledged Biden’s win, are likely to do the same in the Senate.

Trump, who for weeks has made baseless claims that he was defrauded of election to a second four-year term, continues to cheer on protests against his loss, an outcome that will make him the fifth U.S. president in the country’s 245-year history to lose a re-election bid after a single term in office.

“An attempt to steal a landslide win,” Trump said on Twitter over the weekend. “Can’t let it happen!”

He tweeted a video calling for his supporters to mass in Washington on Wednesday to protest certification of Biden as the election winner, saying it “could be the biggest event” in the city’s history.

Trump has lost dozens of court challenges to the outcome of the election, including twice at the Supreme Court. In the latest instance, a federal appellate court Saturday night upheld the dismissal, by a Trump-appointed lower court judge, of a lawsuit seeking to give Trump’s vice president, Mike Pence, power to reject Biden’s winning electoral slates in several states and instead choose slates of Trump electors to overturn the election outcome and keep him in power.

Pence is set to preside Wednesday in what is, at most times, a ceremonial role at a joint session of Congress over the tabulation of the electoral votes that have already been certified by officials in the country’s 50 states and national capital city of Washington.

On Saturday evening, Marc Short, Pence’s chief of staff, said in a statement that the vice president “shares the concerns of millions of Americans about voter fraud and irregularities in the last election.”

The vice president, the statement continued, “welcomes the efforts of members of the House and Senate to use the authority they have under the law to raise objections and bring forward evidence before the Congress and the American people on Jan. 6th.”

But ultimately, as has occurred several other times in U.S. history, Pence, as vice president and the presiding officer over the Senate, will be tasked with announcing his own defeat to Vice President-elect Kamala Harris and that of Trump to Biden, once the electoral vote is counted and the Republican challenges heard and presumably rejected.

Republican Senator Josh Hawley of Missouri announced last week that he would challenge the Biden victory, coupled with the House protest of dozens of lawmakers led by Congressman Mo Brooks of Alabama. Hawley’s protest, specifically challenging Biden’s victory in the eastern state of Pennsylvania with 20 electoral votes, was joined Saturday by 11 other Republican senators led by Ted Cruz of Texas and included four senators elected in November being sworn into the new session of Congress on Sunday.

The 11 called for a 10-day audit of election returns in “disputed states,” saying they would vote to reject the electors from those states until the audit was completed.

Pennsylvania Senator Pat Toomey, a Republican, did not join the protest against the vote in his state, saying that “a fundamental, defining feature of a democratic republic is the right of the people to elect their own leaders. The effort by Senators Hawley, Cruz, and others to overturn the results of the 2020 presidential election in swing states like Pennsylvania directly undermines this right.”

One of the vocal Trump supporters, Senator Ron Johnson of Wisconsin, told NBC’s “Meet the Press” show on Sunday that he joined the protest against the Electoral College outcome because, “We’ve got tens of millions of people who think this election was stolen.”

But another Trump supporter, Republican Senator Lindsey Graham of South Carolina, said proposing a commission two weeks ahead of the inauguration “is not effectively fighting for President Trump. It appears to be more of a political dodge than an effective remedy.”

As they announced their protest on Saturday, Cruz and the other senators acknowledged the presumed futility of their effort, saying, “We fully expect most if not all Democrats, and perhaps more than a few Republicans, to vote otherwise” against overturning Biden’s victory.

The Senate’s top Republican lawmaker, Majority Leader Mitch McConnell, after weeks of refusing to acknowledge Biden’s victory, congratulated Biden and Harris as the election winners after the Electoral College votes were cast in mid-December. McConnell was unsuccessful in urging Republican lawmakers to forego challenging the outcome.

Trump also tweeted Sunday morning about the outcome in the southern state of Georgia, where he lost to Biden by just under 12,000 votes out of the 5 million ballots that were cast.

“I spoke to Secretary of State Brad Raffensperger yesterday about Fulton County and voter fraud in Georgia,” Trump said. “He was unwilling, or unable, to answer questions such as the ‘ballots under table’ scam, ballot destruction, out of state ‘voters’, dead voters, and more. He has no clue!”

Raffensperger, a Republican, replied, “Respectfully, President Trump: What you’re saying is not true. The truth will come out.”

The Georgia vote was counted initially, and then twice recounted, with Biden winning all three times, the first time a Democratic presidential candidate carried the state since 1992.

Jody Hice, a Georgia Republican congressman being sworn in for a fourth term on Sunday, was re-elected on the same ballot as Trump lost in the state.

But Hice said in a tweet that his first concern in the new Congress would be to “Fight for fair elections by objecting to fraud on Jan 6! Liberty must be defended!”