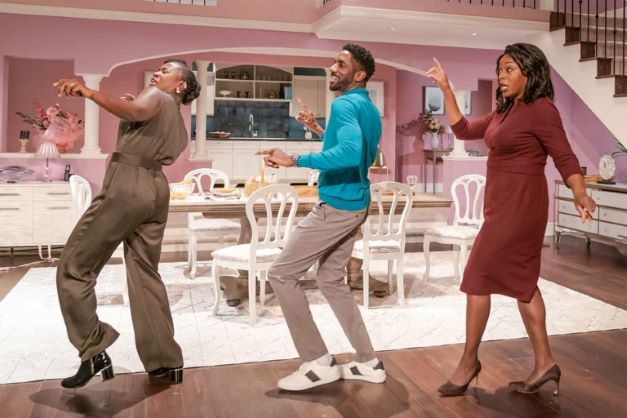 PROVIDENCE, RI: Trinity Repertory Company finishes its 2021-22 Season with Fairview by Jackie Sibblies Drury. Directed by Brown University/Trinity Repertory Company alum Christopher Windom, this show runs May 19 – June 19 with a press opening night on Wednesday, May 25 at 7:30 pm. Tickets start at $27, and more information is available at trinityrep.com/fairview.

In Act 1 of this seemingly typical American family play, it’s Grandma’s birthday, and Beverly needs the party to be perfect. However, the Frasier family is either of no help or non-existent. Then Act 2 brings Beverly’s plights into a whole new, bright white light. And Act 3 is, well – you’re going to have to buy a ticket to find out. Brown University alumna Jackie Sibblies Drury’s 2019 Pulitzer Prize-winning drama “challenges playgoers to think about how the different backgrounds and assumptions they bring to the theater may produce vastly different results once inside” (New York Times). Fairview is an interactive theatrical experience lauded by the New York Times for being dazzling and ruthless.

“Jackie Sibblies Drury is one of the most groundbreaking playwrights in the American theater today,” Artistic Director Curt Columbus said. “She repeatedly pushes at the limits of the theatrical form, inviting audiences to participate in events that challenge, delight, and change the way they look at the world.  In ways that are simultaneously funny and raw, Jackie deals with issues of race and its social structures in a completely novel, totally theatrical style.  Trinity Rep artists and audiences have been fortunate to know Sibblies Drury’s work for over a decade, from her days in the playwriting program at Brown University.  She developed two of her notable early works on Trinity stages, and we are excited to welcome her voice back into our space.”

“Fairview challenges our expectations of how race is portrayed and viewed in the context of theater performance,” Christopher said. “Like most great plays, this one asks the audience to see themselves and put themselves in the situation, to examine their instincts and expectations and ways of interacting. It’s a play that will resonate differently depending on each particular audience member. Some will find healing and catharsis, and some will find a doorway to a conversation they didn’t know they could have.”

Jackie Sibblies Drury is an award-winning playwright whose works include Fairview (2019 Pulitzer Prize), Marys Seacole (Obie Award), Really, and We Are Proud to Present a Presentation About the Herero of Nambia, Formerly Known as Southwest African, From the German Sudwestafrika, Between the Years 1884-1915. A graduate of Brown University’s MFA Program in Playwriting, her play Social Creatures held its world premiere at Trinity Rep in 2013.

Drury has developed her work at Sundance, the Bellagio Center, The Ground Floor at Berkeley Rep, the Soho Rep. Writer/Director LAB, New York Theatre Workshop, the Bushwick Starr, The Lark, and The MacDowell Colony, among others. She has received the Susan Smith Blackburn Prize, a Jerome Fellowship at The Lark, a United States Artists Fellowship, a Helen Merrill Playwriting Award, and a Windham–Campbell Literary Prize in Drama.