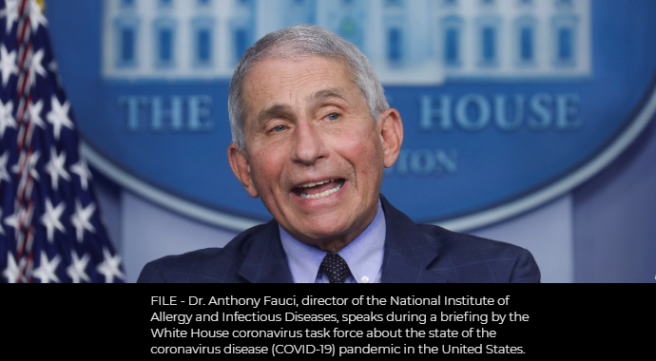 WASHINGTON – Vaccinations against the coronavirus are off to a slow and chaotic start in the United States, but the country’s top infectious disease expert held out hope Sunday that the pace will soon pick up.

“We are not where we want to be, no doubt about it,” Dr. Anthony Fauci told ABC News’ “This Week” show. “We need to catch up.”

So far, the U.S. has distributed 13 million doses of two vaccines produced by drug makers Pfizer-BioNTech and Moderna throughout the country but only 4.2 million shots have ended up in the arms of Americans.

“The vaccines are being delivered to the states by the federal government far faster than they can be administered!” President Donald Trump said on Twitter.

But Fauci, director of the National Institute of Allergy and Infectious Diseases and the chief medical adviser to President-elect Joe Biden, said that the pace of inoculating people – chiefly health care workers and elderly people in nursing homes in the initial stages of the vaccination campaign – is picking up.

“There is a glimmer of hope,” Fauci said, with 1.5 million shots administered in the last three days.

He added, “We’ve got to get interaction between the federal government and the (country’s 50) states, a real partnership.”

In some states, long lines of people waiting for shots have formed on sidewalks leading to health centers. In the city of Houston, Texas, officials had 750 shots available, but 250,000 people called a registration line in hopes of scheduling a vaccination.

Biden has called for 100 million vaccinations in the first 100 days of his administration that starts with his inauguration January 20.

Fauci said the stepped-up pace of inoculations can be met.

Fauci said that if 70% to 85% of Americans are vaccinated in the coming months the United States can return to some sense of normality by next September or October.

Fauci was for a while the face of the Trump’s administration’s response to the pandemic that has killed more than 350,000 Americans and left more than 20.4 million infected. Both figures surpass those of any other country, according to the Johns Hopkins University.

With the U.S. coronavirus caseload growing by tens of thousands a day and Trump preoccupied with a November reelection bid he lost, the White House mostly sidelined Fauci in favor of a more favorable commentary on the development of the vaccines.

In a tweet Sunday, Trump indicated he was still upset about Fauci’s standing in the court of public opinion.

“Something how Dr. Fauci is revered by the LameStream Media as such a great professional, having done, they say, such an incredible job, yet he works for me and the Trump Administration, and I am in no way given any credit for my work,” Trump said. “Gee, could this just be more Fake News?”