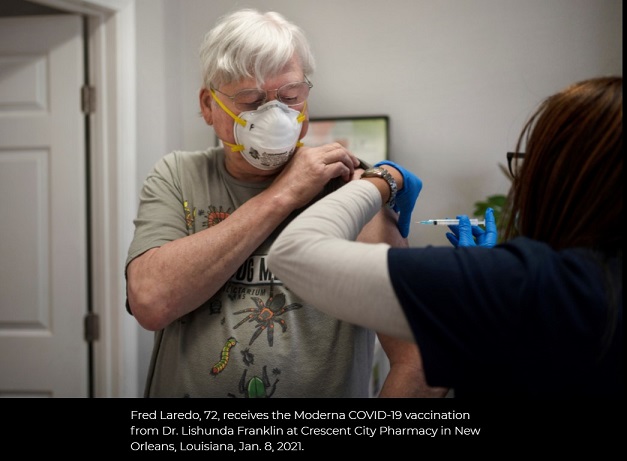 NEW ORLEANS – Ian Farrell was just two days away from getting the first of two doses of the COVID-19 vaccine. He was looking forward, he said, to a major step toward life returning to normal.

So he admitted it was frustrating when he learned, without warning, that his appointment had been pushed back to March.

“Part of it was that I was so close,” Farrell told VOA, explaining his frustration, “and part of it is that my coworkers and I do work that’s not safe for us to do without being vaccinated.”

A 44-year-old social worker focused on community mental health, Farrell must go out and visit patients in their homes, a risky undertaking during a pandemic.

Social workers are renowned for their patience and understanding, and Farrell considers himself a nice guy.

“But, yeah, I kind of snapped when this poor woman called and told me my vaccination was being pushed back two months,” he said. “I can’t imagine what other, less-kind people were saying to her.”

Tens of thousands of calls like the one Farrell received have taken place across Louisiana in the past week. At Ochsner Health, the largest nonprofit health care system in the state, more than 21,000 people were notified that their appointments for COVID-19 vaccines had been canceled or postponed.

Americans across the country are eager to receive their vaccines so they can safely return to the world they knew pre-COVID. But a slow national rollout has frustrated the process.

“We’re ready to go,” said Dr. Jennifer Avegno, director of the New Orleans Health Department and the face of the city’s fight against the virus. “People want this vaccine, but we just aren’t getting enough doses to keep up.”

The Louisiana Department of Health (LDOH) receives doses from the federal government and then is responsible for distributing them to qualified health care providers, including hospitals, clinics and pharmacies across the state. Those providers then administer the vaccines to patients.

“By far the biggest challenge is the small number of doses being made available to us [from the federal government],” said Mindy Faciane, public information officer for the LDOH. In Louisiana, there are 889,000 people in the tiers currently eligible to receive a COVID vaccine, which include health care workers and those at least 70 years old. As of Thursday, only 38% of that number had received their first vaccine dose, according to LDOH.

But that hasn’t stopped thousands of New Orleanians from trying to find coveted appointments for themselves and their loved ones. Entire Facebook groups, such as the 600-member “NOLA Vaccine Hunters,” are dedicated to crowdsourcing information on where the next available appointments might be.

Andi Robinson also used social media to reach out to friends asking for information on where she could get her 82-year-old grandmother an appointment. Robinson said her grandmother has been extremely cautious during the pandemic, avoiding the grocery store and listening to church services on the phone instead of going in person. She even asked family members to change their clothes upon entering the house during the virus’ early days.

“I was worried about her and what the virus could do to her because of her age,” Robinson said, “so as soon as the vaccine was made available, I wanted to get her one.”

She said it took more than a week of busy signals, frustrating computer searches and wait lists before Robinson was finally able to find an appointment for her grandmother at a hospital in February.

But she recently received a call from a local Walgreens pharmacy, where she was on a wait list, notifying her that a spot came available for her.

“And she got her first dose of the vaccination,” Robinson said. “It wasn’t as smooth as we hoped, but I feel like it could have been much worse.”

Being intentional about equity

“Obviously we need to make sure it’s not just the people with the most tech-savvy grandkids who are getting the vaccine,” said Dr. Avegno of the New Orleans Health Department.

Louisiana is one of the most racially diverse states in America. In New Orleans, for example, about 60% of the population is Black.

But the pandemic has not affected all demographics equally. African Americans account for three of every four coronavirus deaths in the city. Experts believe this is because of interrelated factors such as poverty and a disparity in access to affordable healthy food and health care compared with white residents.

“It’s our goal to find and protect the people in our community who are most susceptible to this virus,” Avegno said. “We can’t hope that they just magically find us.”

Gabrielle Perry, a clinical epidemiologist who works at a private health system in New Orleans, said that while troubling early data from around the United States has shown that African Americans are less likely to get vaccinated than their white counterparts, she has been encouraged by the work the city has done to reach Black residents.

“I think New Orleans is a guidepost for how community health can be used to instill public trust,” Perry said. “They’ve used television, deans from historically Black universities and other methods to reach the Black community.”

Avegno said that effort will only gear up in the city as more vaccines become available.

It hasn’t only been city and state governments that are making incredible efforts to get vaccines to Americans.

“Our health care providers are working so hard,” Avegno said. “You have pharmacies, for example, who are used to receiving a dozen calls an hour, who are now receiving 450. And then they find out with very little lead time whether or not they’re getting doses of vaccines to administer. If they are, that’s another huge effort to quickly get patients in the door on short notice.”

And if they find out they aren’t getting vaccine doses, that’s a massive effort, as well.

John DiMaggio and his wife, Daisy, for example, have owned Patio Drugs in a suburb of New Orleans for nearly 30 years. Over the years they’ve developed a loyal following of individual customers, as well as partnerships with larger facilities such as behavioral health organizations and retirement homes.

“We like to say that we’re large enough to serve you but small enough to know you!” he said.

So when it was announced that the federal government would begin sending vaccines to states, customers began reaching out to the DiMaggios hoping to schedule vaccinations.

“We’d request doses and we’d be told to keep checking the system for when we might get some,” he said, “but every time we checked, there weren’t any to give us.”

DiMaggio said he felt frustrated for his customers.

“We want them to be able to get vaccinated so they can go to their job and be safe.”

As January continued and they weren’t receiving doses, they decided to help their customers find other places to get the vaccine. Asked about whether it was hard to send business away, DiMaggio scoffed.

“My wife and I don’t think about this as business,” he said. “We’re trying to help our community beat this thing. That’s what this is about.”

DiMaggio knows a lot of pharmacists and health care professionals in the area, and he said that’s a feeling he believes they all share.

“We’re ready to make our community healthy. We have everything we need to do it except the vaccines. As soon as we get them, we’ll be ready to go.”

And in the last few days there are reasons to be optimistic. The DiMaggios received an email saying vaccines were being delivered to them in the next few days.

Ian Farrell, meanwhile, got a call to tell him he was being moved off a waiting list and into a vaccine appointment this upcoming Wednesday.

“As long as it doesn’t get canceled, I’ll be a happy guy,” he said. “And I’m cautiously hopeful. The Biden administration stressed a strong federal rollout of vaccines, and I’m crossing my fingers that that’s what we’re starting to see.”