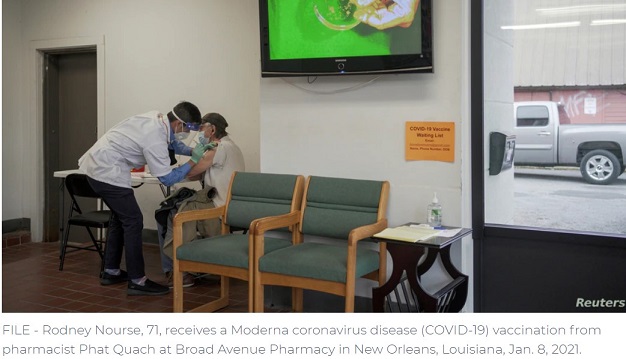 NEW ORLEANS, LA. – Ally Dever lives in New Orleans, Louisiana, and hasn’t seen her parents since November 2019. Like so many Americans, she wants to be reunited with family, but is not willing to take the risk of getting them sick during the continuing COVID-19 pandemic.

Her mother is 77 and her father is 87, living more than 1,100 kilometers away in Oklahoma City, Oklahoma.

Last month, Dever got a giant step closer to having that wish come true. Because she’s a mental health professional, she received both doses of a coronavirus vaccine. As a result, her chance of being infected with COVID-19 — or passing it on to those around her — is believed to be drastically reduced.

And Dever isn’t alone. To date, nearly 25 million Americans (7.55% of the population) have been fully vaccinated against the disease, while twice that much (15.16% of the population) have received at least the first dose. The pace of inoculations is expected to increase further after the recent approval of a third vaccine for use in the United States.

“I get chills just thinking about it,” said Donna Prentice, who helps oversee a vaccine clinic in St. Louis, Missouri, that has administered more than 25,000 doses. “That the world was able to produce an effective vaccine this quickly — my eyes tear up every morning I see the new vaccinations rolled in in their coolers.”

“I would have screamed with joy when I got the shot if I wasn’t sitting in the middle of a quiet pharmacy, so I waited until I got into my car,” she said. But she acknowledged the coronavirus pandemic is far from over – and she still hasn’t made the trip to visit her parents.

“I still feel that we all need to keep wearing masks, stay socially distant and follow CDC guidelines,” she said before adding, “but it does feel good to no longer be so anxious about getting seriously ill myself.”

Vaccinated in an unvaccinated society

Pfizer and Moderna report proof that the vaccines they created prevent mild and severe symptoms of COVID-19 in 95% of patients. They also reduce the likelihood that a vaccinated individual will pass the virus on to someone else.

But experts like Dr. Paul Offit, the director of the Vaccine Education Center at The Children’s Hospital of Philadelphia, stress that — while less likely — the virus can still be transmitted by those who are vaccinated.

“Something being 95% effective is certainly a great sign,” he said, “but that also means 1 in 20 individuals exposed to the virus will be infected.”

When a society reaches herd immunity, meaning when enough of the population has been vaccinated, 1 in 20 people still spreading the virus won’t be a problem because there will be very few individuals left to infect. For now, however, Offit encourages those who are vaccinated to remain careful.

“I remember reading an older study in the Journal of Infectious Diseases,” Offit said, “it was looking at a measles outbreak, I believe in Norway. And they found something that felt counterintuitive to me at the time.”

“That’s the more dangerous situation we’re in right now,” Offit explained, “sure, some of us are vaccinated, but our society as a whole isn’t yet immunized.”

Molly Schuman, a registered nurse in Madison, Wisconsin, has been vaccinated. But she isn’t rushing to return to a pre-pandemic way of life.

“My husband and my daughter aren’t vaccinated yet, and it’s likely going to be some time before they are,” she said. “I imagine my life’s going to stay pretty much as it has the last year until more people get their shots.”

Ethan Hazzard-Watkins is a counselor and recently received his vaccination in Brattleboro, Vermont. He said he started to cry after he got his first dose because of how momentous the occasion felt. When he left the clinic and went back outside, however, he said it seemed anticlimactic. The second dose left him feeling similarly.

“It hasn’t changed much for me,” he said. “Work is still remote. I still wear my mask and avoid contact with those outside my household. I think things will feel normal when I can hug my parents, and sing and dance to live music, and play soccer with my friends. But we’re not there yet.”

Hope on the horizon

Among Americans eager to return to their pre-pandemic lives, some have expressed frustration that the vaccine doesn’t allow them to do so more quickly.

New Orleans-based health care communications consultant Mariana Rodrigues worries the lack of an immediate reward for being vaccinated could discourage some people from getting the shots.

“When you ask people why they want to get vaccinated, it’s usually because they want to see their family and friends,” she said. “If you tell a grandparent that after getting both vaccines they still can’t hug their grandchild, it may take away some of the motivation to get vaccinated in the first place.”

Dr. Offit said it’s the question he hears most frequently: can I see my family members once I’m vaccinated?

“My general answer is yes,” he said, “there’s risk, of course, but you’ve mitigated most of it by getting those most vulnerable family members their vaccine. It’s better if all family members are vaccinated, but if Grandma is — and everyone else is being careful and wearing masks — I think that’s OK until everyone gets their vaccinations.”

Returning to a semblance of pre-COVID normal might be taking longer than many Americans hoped, but, as more people see friends and family members getting inoculated, some sense that the overall trend is moving in a positive and hopeful direction.

“Little things are changing,” said Susan Graber, a music teacher from Huntington, New York, who recently received her second vaccination dose. “A student sneezed in my direction and I was able to not have a mini panic attack. That was nice. I even went to the mall. I wore my mask, of course, but I was there and it felt nice.”

Hanna Bridges-Curry is a nursing student in New Orleans. Despite having received her vaccine, she and her fiancé recently made the decision to postpone their November wedding because they weren’t sure if it would be safe to have a larger group together by then.

“That was disappointing, obviously,” she said, “but on the positive side I’m happy to no longer be in fear that I’m bringing the virus home from the hospital, and I’m hopeful I’ll be able to meet my 3-month-old nephew for the first time soon. So, things are getting better.”

That’s true for Ally Dever, as well, whose parents will be receiving their second vaccination dose this Wednesday in Oklahoma City. That’s another big step closer to that hug she wants so badly.

But she said she’s not ready to start dancing in the streets just yet.

“Not until all those I care about have their vaccinations, as well,” she said. “I’m happy — but it’s a tempered happiness for now.”