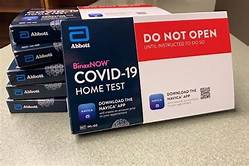 PROVIDENCE, RI – Governor Dan McKee today announced that Rhode Island has received and will distribute an additional 500,000 COVID-19 at-home rapid tests, bringing the total tests distributed to 1 million in just over a month.
“Our whole of government COVID response team is focused on making it more convenient for Rhode Islanders to get tested when they need to,” said Governor McKee. “Our team remains committed to working closely with municipal leaders and community partners to ensure a strong pandemic response and recovery.”
The State will be making the 500,000 self-tests available to cities and towns and community organizations throughout Rhode Island over the next week, as was the case with the first 500,000 at-home rapid tests received earlier this month. Seventy percent of these tests will be distributed to cities and towns. All cities and towns will receive tests to redistribute. Thirty percent of the 500,000 tests will be redistributed through community-based organizations.