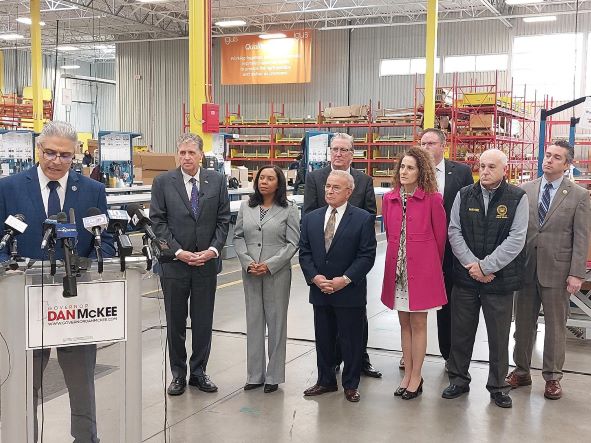 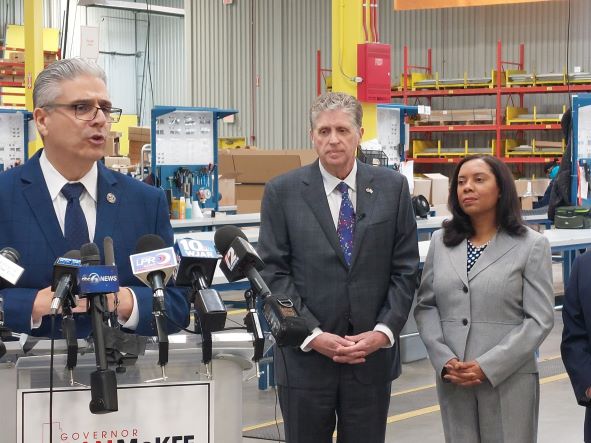 EAST PROVIDENCE – Governor Dan McKee today announced his campaign for re-election as governor, pledging to build on his progress leading the state through the COVID-19 pandemic and deliver economic growth for Rhode Island families. McKee will spend the next few months sharing his vision to grow jobs, lower costs for hardworking families, support small businesses, and put money back in people’s pockets.

”Over the last year, we’ve delivered strong leadership in a time of crisis, and going forward, my message to Rhode Island is simple: I’m running for re-election to grow jobs, boost wages, grow our economy, and put money back in your pockets. As we continue to lead our state through a once-in-a-century crisis, our sole focus is delivering an economic rebound for working people,” said Governor Dan McKee. “Rhode Islanders don’t ask for much. They want the security of a good job, with a good wage. They want to know their schools are delivering for their kids. They want a safe home to live in. They want their government to have its finances in order, just like they do. That’s exactly why I’m launching my campaign for re-election: to keep us moving forward with strong leadership, good jobs for hardworking people, support for our small businesses, and a growing economy – for everyone.”

McKee made his campaign announcement at igus, a manufacturing company in East Providence that has made tremendous growth during the pandemic – adding more than 100 workers. Over the past year, Governor McKee has worked closely with manufacturers and small business owners to navigate a responsible reopening, earning national recognition for the state’s approach. Governor McKee is dedicated to helping businesses like igus to expand, partnering with cities and towns to support small business growth and attract new companies to Rhode Island.

Over the last year, Governor McKee has delivered leadership when Rhode Island needed it most:

“Governor McKee took office not even a year ago. He stepped in and led us through a tough moment for our state, with children struggling to learn, businesses struggling to stay open, and a slow-moving vaccine roll-out. But in a short period of time, Governor McKee demonstrated strong leadership to put us on the right track and get our state moving again,” said East Providence Mayor Bob DaSilva. “That’s why I’m supporting Dan McKee for Governor in 2022 – he’s led us through challenging times, and he’s dedicated to creating jobs all across our state, he’ll work to put more money in Rhode Islanders’ paychecks and in their pockets, and he’s proven that he knows how to keep our economy moving.”

Since Day One in office, Governor Dan McKee has guided a strong pandemic recovery in Rhode Island by prioritizing public health and putting working people first. From getting vaccines distributed statewide and into people’s arms, to supporting small businesses and the hardest-hit sectors with much-needed relief, to getting children safely back into classrooms, the McKee Administration has been focused on getting Rhode Island moving again. In addition to delivering immediate relief for businesses and families, Governor McKee is making once-in-a-generation investments to ensure Rhode Island is a more affordable, equitable and safer place to live and work for today and decades to come.

“As our state looks toward recovery, Rhode Island families deserve a governor who knows the hardships they’re facing, understands how to work with their communities, and has the experience to get things done. For the past year, Governor McKee has worked tirelessly to help us rebound – we’re leading the nation in vaccine distribution, helping our state to reopen responsibly, and investing in our small businesses so that we can create jobs,” said Lieutenant Governor Sabina Matos. “Governor McKee is the right leader to continue our recovery, with bold plans to lower taxes and costs for veterans and families, invest in green jobs and affordable housing, and improve our schools and child care. He’s dedicated to fighting for Rhode Island families, I’m proud to support him for Governor, and I’m looking forward to working with him to move Rhode Island forward.”

“As someone whose family has owned a small business in Rhode Island for more than 100 years, Governor McKee is delivering strong, steady leadership for Rhode Island when we need it most. Governor McKee took office amidst a once-in-a-century crisis and today, we’re now leading the nation in putting shots in arms while keeping our economy open and our children in school,” said North Providence Mayor Charlie Lombardi. “No matter the challenges we’ve faced, Governor McKee has remained laser-focused on helping Rhode Island families and I’m proud to support him for re-election.”

“Governor McKee has shown that he is committed to supporting every corner of our state and all 39 of our cities and towns. As a former Mayor who still lives in the same town that he grew up in, he understands what Rhode Islanders are looking for: a good economy, great schools, safe streets, 21st century infrastructure, and a government that focuses on the details to help make it just a little bit easier to get by,” said Woonsocket Mayor Lisa Baldelli-Hunt. “Governor McKee—from when he was Mayor of Cumberland through his announcement today—has always supported hardworking families and will continue to do that as Governor.”

“Governor McKee’s message has always been straightforward: he is focused on growing jobs, supporting businesses big and small, including standing side by side with the Pawtucket during the Pawtucket Red Sox negotiations, and ensuring we build an economy that delivers for hardworking people in this decade – and the next,” said Pawtucket Mayor Don Grebien. “At this critical moment for our state, now is the time for leadership. That’s exactly what we’re getting from Governor McKee and that’s why I’m proud to support him for re-election.”

“In this unique moment in our history, we must come together – and work together – for the future of our state. Rhode Island families want a leader who will stay focused on the issues – a strong recovery so they can get back to work, better schools so that their children are learning, and great communities where they can raise their families,” said Johnston Mayor Joe Polisena. “Hardworking families across Rhode Island’s 39 cities and towns know that Governor McKee is in their corner, fighting for them, and he deserves to be re-elected to lead our recovery in the years ahead.”

“Rhode Island needs leadership and experience as we navigate this recovery. Governor Dan McKee is a former mayor and knows better than anyone that what Rhode Island families want is a leader who will work hard, focus on the details, and make progress,” said Lincoln Town Administrator Phil Gould. “Under Governor McKee’s leadership, we’re working together as a state to make a full recovery – with the best vaccination rates in the country and plans in place to support businesses and create jobs. I know what it’s like to come into office mid-term and the governor has done an excellent job, especially in a time of crisis. Governor McKee deserves to be re-elected to keep Rhode Island moving forward.”

“When you’re leading a town, it’s a hands on job and you have to get the details right. When Governor McKee took office, he put his decade-long mayoral experience to work for the people of Rhode Island. He rolled his sleeves up and went to work with municipalities to get shots in arms, safely reopen our economy, and keep kids in classrooms,” said Bristol Town Administrator Steven Contente. “You need strong leadership in times of crisis and, under Governor McKee’s watch, we have the highest vaccination rate in the country, our economy is rebounding, and we have a plan for the path forward. I’m proud to be supporting the Governor as he works to lead our state for another four years.”