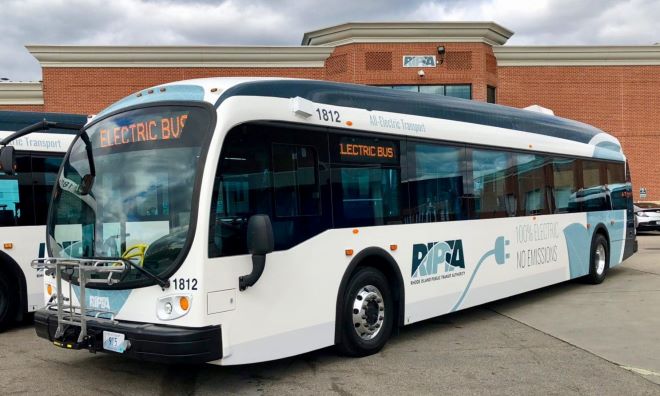 “The new electric charging station furthers our Administration’s commitment to cleaner air quality and zero-emission, sustainable energy. Projects like this also build on our momentum in ensuring Rhode Island is at the forefront of the green economy,” said Governor McKee. “It is also critical that we ensure easier access to public transportation for riders, who rely on RIPTA’s services to get to school, work, or the doctor’s office. I thank all of our partners who made this day possible and look forward to seeing the permanent fleet of electric buses on roads across our state.”

The Electric Bus In-Line Charging Station will be located along the R-Line, RIPTA’s most frequently-used and highest-ridership route, connecting Providence and Pawtucket. RIPTA’s first fully electric bus fleet will operate on this key corridor, lowering emissions in an area where many low-income and BIPOC communities have been affected by air pollution.

“Electrification of mass transit is the future and necessary for out state to achieve its ambitious climate goals,” said Lt. Governor Sabina Matos. “This charging station is an important step towards achieving a net-zero emissions future and also for providing clean energy public transit to our communities who rely on it most.”

“This new electric charging station is not only a key component in our battle against climate change, but an environmental justice tool as well,” said Scott Avedisian, Chief Executive Officer of RIPTA. “Constructing this station at Broad City Line cements our commitment to reducing global carbon emissions, while improving air quality for transit-dependent communities burdened by the adverse health effects of pollution.”

“Public transportation is crucial to so many Cranston residents,” said Cranston Mayor Ken Hopkins. “This investment in green technology is a positive step towards making Rhode Island a healthier state by lowering emissions and reducing the negative impacts of air pollution. I applaud RIPTA for their efforts.”

“This is an exciting step forward as our state continues its efforts to electrify our transit fleet,” said Providence Mayor Jorge O. Elorza. “Climate justice and equity must be at the forefront of our infrastructure investments, and I look forward to the benefits for transit riders and our entire community when this project is completed.”

“FTA is proud to support RIPTA’s transition to a cleaner and greener bus fleet,” said FTA Region I Administrator Peter Butler. “The Electric Bus In-Line Charging Station will help RIPTA advance its goals to improve air quality and address our global climate crisis. FTA is committed to supporting zero-emission bus projects through the Low or No Emission Vehicle Program and the additional resources available under the Bipartisan Infrastructure Law to advance sustainable transit initiatives.”

“It’s great to see RIPTA surging ahead with plans to electrify its bus fleet and leveraging federal investments to make needed infrastructure improvements. The new generation of cleaner, greener buses will reduce pollution and won’t be impacted by foreign oil price shocks. I will continue working to deliver federal funding to help RIPTA make a smooth transition to electric buses, install chargers, and upgrade related infrastructure,” said Senator Reed, a senior member of the Appropriations Committee who helped deliver $1.1 billion in federal funding this year to expand the Low- and No-Emission Transit Vehicle Program, which will help accelerate the transition to clean public transit nationwide.

“RIPTA will be able to run its busiest route entirely with electric buses once this new charging station is complete, resulting in lower emissions and cleaner air in communities that have borne the brunt of pollution for too long,” said Senator Whitehouse. “More federal investments from our bipartisan infrastructure law can help the state continue to green up the public transit system.”

The roughly $6.7 million project, which BOND Civil & Utility Construction, Inc. is expected to complete by Fall 2022, is funded largely by a Volkswagen settlement fund. The remaining funds are coming from federal transit funding. BOND Civil & Utility Construction, Inc. of Medford, Massachusetts is experienced in delivering critical infrastructure, including electric bus charging stations, for institutions, major utilities, and power and energy companies. They are working closely with National Grid to ensure that electrical power and a high-pressure gas line is available for this project.

About the Zero Emissions Electric Bus Program: In May 2018, the State of Rhode Island announced that approximately $14.4 million of the state’s Volkswagen settlement funds would be used to take important steps toward improving air quality in Rhode Island – including the acquisition of electric buses for the Rhode Island Public Transit Authority. In 2019, RIPTA launched a pilot program with three leased all-electric buses. Phase I of the pilot provided RIPTA with an opportunity to learn about the new technology, train staff, and test the performance of the electric buses on a variety of RIPTA routes. Now that the Phase I is complete, RIPTA has moved forward with Phase II – the construction of this in-line charging station, as well as the purchase of fourteen electric buses as permanent additions to its fleet. Visit RIPTA.com/electric-bus to learn more about the Authority’s Zero Emissions Electric Bus Program.