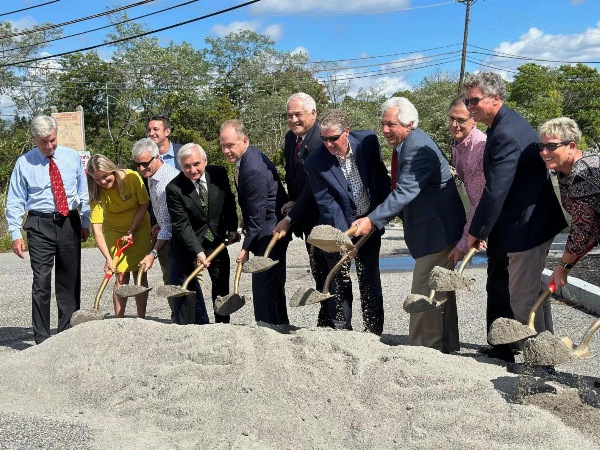 BARRINGTON, RI – Governor Dan McKee, United States Senators Jack Reed and Sheldon Whitehouse, Rhode Island Federal Highway Administrator Carlos C. Machado, and Rhode Island Department of Transportation (RIDOT) Director Peter Alviti, Jr. today gathered with other state and local leaders to break ground on the East Bay Bike Path Bridges project. The $24 million project will replace both bridges, which pass over the Barrington and Palmer Rivers.
“For more than 30 years these bike path bridges have been the highlight for riders of the East Bay Bike Path,” Governor McKee said. “And now thanks to the efforts of our Administration and Rhode Island’s Congressional delegation, we have the funds to replace both bridges and restore these iconic crossings.”
Realizing the importance of these bridges to recreational riders in the East Bay communities, the Administration moved up $10 million in its 10-year-plan to fund the bridges and sought additional funding to reach the $24 million needed to replace both bridges. Senators Reed and Whitehouse were instrumental in securing another $14 million – $5 million in earmark funding earlier this year and $9 million in additional federal funding this summer – to fully fund the project.
“The East Bay Bike Path turned 30 this year. It’s a tremendous community asset and I’m proud to help deliver over $14 million in federal funds to help replace these bridge sections and make it stronger and safer for the next thirty years and beyond,” said Senator Reed. “Replacing the bridges is a major capital investment that will pay off for generations. I’m proud to have worked at the federal level to help make it happen. And I’m looking forward to the day when we can return to this spot on bikes and cycle across this new, smooth, accessible and sustainable section of the East Bay Bike Path.”
“The East Bay Bike Path is a Rhode Island gem, and the bridges spanning the Barrington and Palmer Rivers are two of its highlights,” Senator Whitehouse said. “I’m very pleased to join Senator Reed in securing funding to replace both bridges, which had been closed for several years.”
“For years, Rhode Islanders have enjoyed spending time along the East Bay Bike Path with their friends and family,” Congressman Jim Langevin said. “I’m so glad that this federal funding will help to rebuild these two bridges, so that Rhode Islanders can once again ride their bikes over the beautiful Barrington and Palmer rivers.”
“The East Bay Bike Path is a beloved trail that allows residents and visitors to travel between Providence and Bristol,” said Congressman David Cicilline. “I’m proud to help bring this federal funding that will enable the state to rebuild two bridges that have been out of commission for several years, supporting more convenient and safer travel along the pathway. Congratulations on today’s groundbreaking, and I look forward to seeing the finished bridges.”
“RIDOT was focused on fully funding these bridges as the community wanted. We are very, very grateful to the Congressional delegation and particularly Senator Reed for securing additional federal funds so that this work can go forward in a timely way,” Director Alviti said.
Work will begin on the project following the receipt of necessary environmental permits before starting demolition of the old structures. The commencement of work in the field is contingent on the permit process but could begin next spring. Final completion is expected by the end of 2025.
The design-build team will utilize prefabricated modular truss Acrow bridges that are quicker to install and have less impact on the environment as this lightweight design requires smaller foundational elements and piers. They also are easier structures to maintain, with a very long design life.
RIDOT will be working with the design-build team to minimize shoreline impacts during construction and the use of retaining walls and piers in the final design, further supporting an environmentally sensitive design. The low profile of the bridge design and its installation method also minimizes the impact and high cost of relocating nearby utility lines.
Each new bridge will be approximately 300 feet long and 14 feet wide. More details on the bridge design will be available next spring once the design and permitting phase is complete.
The old bridges date back to the 1880s and were converted from railroad bridges to bike path bridges in the 1980s. RIDOT closed the bridges in late 2019 due to their deteriorated and unsafe condition. The East Bay Bike Path is one of the oldest multi-town bike paths in the state, is 14.5 miles long from Providence to Bristol, and is used by hundreds of thousands of people each year.
RIDOT worked closely with local officials in Barrington and Warren on temporary path enhancements that would meet the needs of the community and provide a safe, continuous bikeway that cyclists and walkers can use until the old bridges are replaced. The $2 million temporary enhancement project was completed last year. The project also includes funding for removing the temporary improvements and restoring the sidewalks to their original condition on the vehicular bridges.
The Department is committed to enhancing connections for bicycles and pedestrians, investing approximately $20 million a year and incorporating these features into its major projects. Among them are the Henderson Bridge, which will include a dedicated bikeway connecting Providence and East Providence, and the Route 6/10 Interchange with approximately $10 million in bicycle and pedestrian infrastructure. The improvements at the 6/10 will work in conjunction with more than $6 million in new federal funding secured by Senator Reed and Senator Whitehouse earlier this month to connect the Washington Secondary Bike Path in Cranston to the Woonasquatucket River Greenway in Providence.
All construction projects are subject to changes in schedule and scope depending on needs, circumstances, findings, and weather.