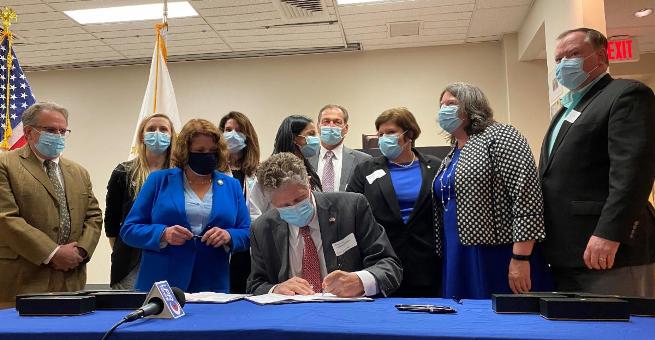 PROVIDENCE, RI – Governor Dan McKee, joined by House Speaker K. Joseph Shekarchi, Senate President Dominick J. Ruggerio, Senate Majority Whip Maryellen Goodwin and House Deputy Majority Whip Mia A. Ackerman, today signed into law the Maryellen Goodwin Colorectal Cancer Screening Act (S-383A, H-5432A) which provides full insurance coverage for colorectal cancer screenings. The bill-signing took place at Miriam Hospital where Majority Whip Goodwin is currently undergoing treatment for colon cancer.
“Expanding access to colorectal cancer screenings will save lives,” said Governor McKee. “I am proud to sign this bill into law, removing barriers many Rhode Islanders face in accessing crucial screenings. I thank Senate Majority Whip Goodwin, House Deputy Majority Whip Ackerman and all the inspiring advocates who championed this effort and worked tirelessly to ensure this bill becomes law.”
The bill will require Rhode Island health insurance plans and nonprofit hospital and medical corporation plans to provide coverage for screenings for prostate and colorectal cancers, as recommended by the American Cancer Society. This coverage would include initial screening examinations, as well as a follow-up colonoscopy if necessary. The bill also prohibits insurers from imposing cost-sharing on any of the screenings covered by this bill, as long as the services are delivered within the insurer’s provider network.
“I can personally attest to how critically important it is that everyone is able to get recommended colorectal cancer screening. Cancer screening is routine preventive care that catches cancer early and saves lives as well as reducing health care costs down the road. Copays, cost-sharing and insurers that don’t cover pre-screening only discourage people from getting the care they need to protect themselves. This legislation will save lives by increasing access to these life-saving screenings,” said Senate Majority Whip Maryellen Goodwin (D-Dist. 1, Providence), Senate bill sponsor.
“Early detection saves lives. Colorectal cancer is the second most common type of cancer, and it is 90 percent curable if it is caught early. In addition to saving lives, identifying colorectal cancer early saves money because treating it then is far less complicated and less costly than when it is advanced,” said Deputy Majority Whip Mia A. Ackerman (D-Dist. 45, Cumberland, Lincoln), House bill sponsor. “Everybody involved – doctors, patients and insurers – is on board with this bill, and I’m proud to have been able to bring it to passage this year. It’s a bill that will truly save lives.”