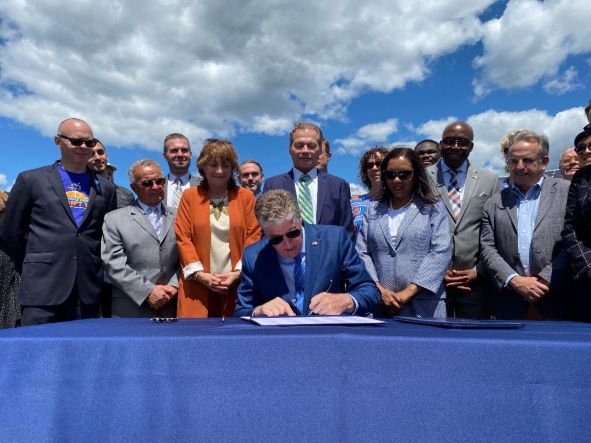 PROVIDENCE, RI – Continuing his #RIMomentum Tour, Governor Dan McKee today signed into law historic legislation to substantially increase renewable energy production and supply by requiring that 100 percent of Rhode Island’s electricity be offset by renewable production by 2033. Rhode Island is the first state in the country to commit to 100 percent renewable energy by 2033, the most aggressive renewable energy standard among any U.S. state.
The Governor was joined at the signing by Lt. Governor Sabina Matos, North Providence Mayor Charles Lombardi, Rhode Island AFL-CIO Secretary-Treasurer Patrick Crowley, and bill sponsors Senate President Dominick J. Ruggerio and Representative Deborah Ruggiero.
“Last year, I signed the Act on Climate, which sets mandatory, enforceable climate emissions reduction goals leading the state to achieve net-zero emissions economy-wide by 2050. Today’s historic legislation outlines a firm 10-year commitment to achieve our climate change mitigation goals, giving Rhode Island the most ambitious renewable energy standard in the nation. When it comes to clean energy innovation, Rhode Island has the momentum and the tools to build on it,” said Governor McKee.
The legislation (2022-H 7277A, 2022-S 2274Aaa) institutes annual increases in the state’s Renewable Energy Standard, the law that requires utility companies to purchase renewable energy certificates representing a certain percentage of the power they sell annually. Those certificates are traded in a regional marketplace.
“Here in the Ocean State, we know that action to address the climate crisis cannot wait. Rhode Islanders are already feeling the effects of climate change, and the risks facing our communities will grow increasingly dire in the years ahead. This legislation sets out a bold but achievable goal and builds on the historic progress we made in 2021 through the Act on Climate. It will keep Rhode Island, home to the nation’s first offshore wind farm, on the forefront of renewable energy innovation. And it will help us harness the power of clean energy as a driver of economic growth and opportunity,” said Senate President Dominick J. Ruggerio (D-Dist. 4, North Providence, Providence).
Said Representative Deborah Ruggiero (D-Dist. 74, Jamestown, Middletown), “This bill supports renewable energy growth, and is consistent with the Act on Climate’s goal of reducing carbon emissions by to net-zero by 2050. In addition to reducing emissions and our reliance on fossil fuels that must be brought to Rhode Island from other places, creating renewable energy supports the green industry, creating thousands of good paying jobs right here in Rhode Island. We’ve seen a 74% increase in green jobs since 2014, and that trend is going to continue as we deepen our commitment to renewables.
Current state law requires annual 1.5 percentage point increases in the amount of electricity required to be generated from renewable sources through 2035. The legislation signed by the Governor accelerates those increases to achieve a 100 percent Renewable Energy Standard in 2033.
Under it, the target would increase by an additional 4 percent in 2023, 5 percent in 2024, 6 percent in 2025, 7 percent in 2026 and 2027, 7.5 percent in 2028, 8 percent in 2029, 8.5 percent in 2030, 9 percent in 2031, and 9.5 percent in 2032 to achieve the goal of 100 percent of Rhode Island’s electricity demand being offset by renewable energy by 2033 and thereafter.
“A 100 percent renewable electric supply is vital if Rhode Island is to achieve its Act on Climate goals and reduce economy-wide greenhouse gas emissions to net zero by 2050,” said State Energy Commissioner Nicholas S. Ucci. “Our state is once again setting a bold, but achievable pace for the nation, and we are now one step closer toward a more secure, reliable, affordable and equitable energy future for all. I wish to thank Governor McKee, the General Assembly, and all those stakeholders who have helped propel this keystone policy into law.”