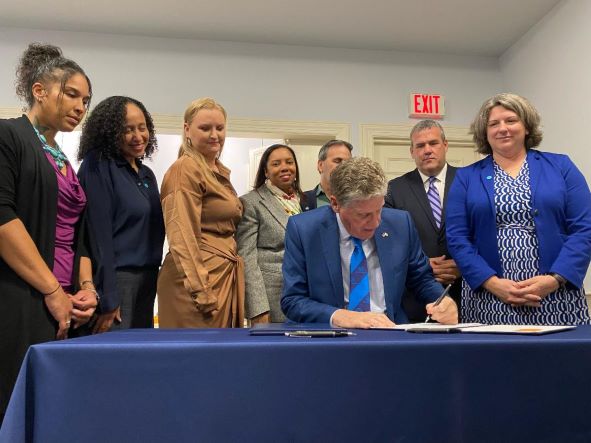 WARWICK, RI – To mark Domestic Violence Awareness Month, Governor Dan McKee today ceremonially signed legislation which helps protect survivors of domestic violence by keeping their addresses confidential.
The bill signing took place at the Rhode Island Coalition Against Domestic Violence. Governor McKee was joined by Lt. Governor Sabina Matos, bill sponsors Senator Dawn Euer and Representative Gregg Amore, and numerous advocates, groups, and organizations from across Rhode Island.
The legislation (2022-H 8015A, 2022-S 2659A) establishes the Address Confidentiality Program, which enables survivors of domestic violence to apply to the Secretary of State to have an address designated by as the person’s substitute address.
“Ensuring the privacy and protection of domestic violence survivors is of the utmost importance. This legislation, which I am proud to sign, provides Rhode Islanders the opportunity to safely live their lives, free of worry or concern that their abusers will be able to harm them or their loved ones,” said Governor Dan McKee. “I sincerely thank the legislators, advocates, and organizations who saw to it that this legislation passed the House and Senate and made it to my desk.”
“Helping survivors find safe, stable housing where they can’t be reached by their abuser is the first step in breaking the cycle of domestic violence,” said Lt. Governor Sabina Matos. “This law will ensure that no victim will have to live in fear of being contact by their abuser because their address may be listed in public records. Thanks to the work of the Coalition Against Domestic Violence and our partners across government, survivors now have an additional layer of protection, and we are one step closer to ending the scourge of domestic violence.”
“The effects of domestic violence impacts every aspect of a victim’s life and tears at the very fabric of our communities. And sadly, even though a victim may physically escape their abuser, it does not always mean that the abuse will end for themselves or their children. This bill will keep victims of domestic violence and their families safe from their abusers while also allowing them to build back and live their lives as normally and safely as possible. Everyone should feel safe and secure in their homes and this bill will provide victims of domestic abuse another layer of protection from their abusers. I also have to thank the many victims of domestic violence who bravely told their stories while advocating for passage of the bill. It is my hope that this bill can give them, and others like them, the security and safety for themselves and their families that they deserve,” said Representative Gregg Amore (D-Dist. 65, East Providence).
“Far too often, survivors of domestic violence, sexual assault, or other abuse face continued harassment and intimidation from their abuser. This prevents survivors from healing and puts their safety at continued risk. The Address Confidentiality Program will create a pathway for survivors and their families to safely participate in the many public aspects of life, which is something everyone deserves. I want to thank the Rhode Island Coalition Against Domestic Violence for its assistance and advocacy, and the Secretary of State’s office for its collaboration,” said Senator Dawn Euer (D-Dist. 13, Newport, Jamestown).
Rhode Island Coalition Against Domestic Violence Executive Director Lucy Rios said: “When victims of domestic abuse relocate after fleeing violence, we must do all we can to keep them safe and protect their wellbeing. This life-saving program provides an extra layer of safety and security for survivors and their children, and gives them peace of mind that their abuser will not find them. Not only will this bill support survivors and their families who have been able to relocate, just knowing this program exists can also make all the difference for a victim navigating how to leave an abusive situation. We are filled with gratitude for everyone who made this legislation a reality – including several survivors who shared their experiences – and we celebrate this victory for survivor safety in Rhode Island with Governor McKee and the legislative champions who sponsored and supported this bill.”