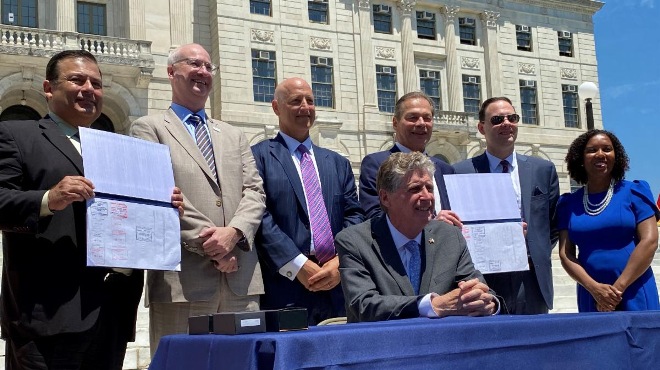 PROVIDENCE, RI – Joined by House Speaker K. Joseph Shekarchi and Senate President Dominick J. Ruggerio, Governor Dan McKee today signed the Marc A. Crisafulli Economic Development Act – legislation that strengthens the agreement between the State of Rhode Island, IGT and Bally’s Corporation.
The legislation (2021-H 5223A, 2021-S 0040A) represents a $250 million economic development plan that includes securing 1,100 well-paying Rhode Island jobs and proactively protecting Rhode Island’s third largest source of revenue.
The partnership is expected to create extraordinary economic development opportunity and benefits for Rhode Islanders as the state continues to emerge from the COVID-19 pandemic. This includes securing 1,100 jobs at IGT, extensive renovation and expansion to Twin River Casino Hotel in Lincoln, and thorough technological upgrades.
“This agreement has been dramatically improved since first being introduced in 2019,” said Governor Dan McKee. “This deal secures additional economic development benefits for Rhode Island, better wages for Rhode Island workers, and enhances our gaming competitiveness. We thank our local partners for coming together to finalize this agreement. This is not only an important source of revenue for our state but employs thousands of Rhode Islanders and provides a great reason to visit Rhode Island. I thank the Speaker and Senate President for their leadership in enhancing this proposal.”
“The legislation increases revenue to our state and preserves critical jobs,” said House Speaker K. Joseph Shekarchi (D-Dist. 23, Warwick), bill sponsor. “I’m proud of the ways we were able to improve this legislation during the legislative process to make it more beneficial to the taxpayers of Rhode Island, and grateful to Senate President Ruggerio, who played a critical role in bringing the two companies together.”
“The Senate Finance Committee undertook an exhaustive review of this proposal and developed legislation that protects more than 1,000 jobs, guarantees significant capital investment, and preserves the State’s third-largest revenue stream,” said Senate President Dominick J. Ruggerio (D-Dist. 4, North Providence, Providence), bill sponsor. “I am grateful to Speaker Shekarchi for working to enhance the proposal to further benefit the state, and to IGT and Bally’s for their continued partnership and investment in our state.”
“Thank you, Governor, for your support of this legislation which will, among other things, invigorate the economy with a $255 million infusion of capital, will preserve high paying jobs at IGT, and will allow for the creation of new ones at Bally’s. After 101 days of your administration, I think we can safely say that Rhode Island is fortunate to have you at the helm,” said Marc Crisafulli, Executive Vice President, Strategy and Operations for Bally’s Corporation and President, Rhode Island Operations. “This legislation is a perfect illustration of the potency of business and government working collaboratively for the citizens of this state. We have Senator Ruggerio to thank for recognizing the value of harnessing the best both companies had to offer which forged a compromise that focused on jobs, economic development, and maximizing state revenues by enhancing the competitiveness of our casinos. And Speaker Shekarchi, you asked us both to give a little more and in so doing, made an already good piece of legislation even better. Collectively, we have increased the upfront payment to the state, accelerated job creation at Bally’s corporate headquarters, enhanced our commitment to the I-195 Commission for park renaming rights and enlarged the Bally’s footprint for commercial space in Providence. My sincere thanks to both of you for so actively engaging and leading your members on passage of this legislation.”
“This is an economic development success story that Rhode Island’s leaders should be proud of and should be able to say with confidence: ‘Yes, we did this,'” said Jay Gendron, Chief Operating Officer, Lottery, IGT. “We kept more than 1,100 well-paying jobs here; brought in more than $250 million in investment; approved a $100 million renovation and expansion to protect the state’s third largest source of revenue; and ensured not one, but two companies continue to operate right here in Rhode Island for the next 20 years. And all of this was accomplished during a once in a lifetime pandemic. You have to tip your hat to the leadership of this state who stepped up to make this happen.”
The components of the legislation:
Additionally, this agreement increases the initial licensing fee (from $25 million to $27 million); raises the minimum wage for Rhode Island employees to $14 an hour by Jan. 1, 2023 and $15 an hour by Jan. 1, 2024; and increases Bally’s commitment to lease commercial space in Providence by 40 percent, from 12,000 square feet to 20,000 square feet.
The legislation was named the Marc A. Crisafulli Economic Development Act to honor the executive vice president of Bally’s, who is battling cancer.