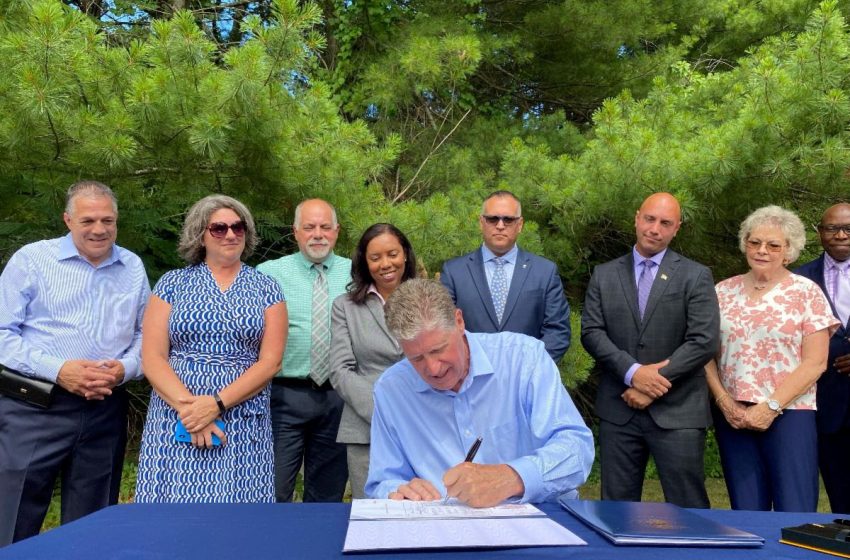 COVENTRY, RI – Today, Governor Dan McKee was joined by Lt. Governor Sabina Matos, bill sponsors Senator Leonidas P. Raptakis and Representative Thomas E. Noret, members of the Johnson’s Pond Civic Association, and state and local officials to sign legislation that grants the Department of Environmental Management (DEM) the authority to restore water levels in Johnson’s Pond in Coventry.
The legislation (2022-S 2181A, 2022-H 8205) would require that any person operating or owning a dam with a storage capacity greater than 1,400 normal storage acre feet of water to obtain a permit from DEM to raise or lower the water level behind the dam.
“Johnson’s Pond is a vital asset and a tremendous resource for the community and for the hundreds of residents who live along the water, and they have been greatly impacted by water levels that have been either too high or too low,” said Governor McKee. “For the people living in this area, this legislation has been a long time coming. I thank everyone who played a key role in getting this legislation through the House and Senate and onto my desk.”
“Any change to a body’s water level carries wide-ranging consequences for the people, flora, and fauna that have built their life around it. This bill ensures those decisions are made in careful consultation with scientific experts who can choose what’s right for our state,” said Lt. Governor Sabina Matos. “Thank you to the Johnston’s Pond Civic Association for advocating on behalf of their community and their environment, and to our partners in government for working with them. I am glad we can come together today to celebrate the success of their efforts.”
“The Johnson’s Pond Association, along with the town of Coventry, thank the General Assembly for passing this legislation aimed at protecting an important state water asset and its vibrant ecosystem. This legislation will help to mitigate against purposeful flooding of the Pawtuxet River which impacts at minimum five communities and approximately 240,000 residents and preserve access to Johnson’s Pond for the 600 homeowners living on or in close proximity to the pond,” said Senator Leonidas P. Raptakis (D-Dist. 33, Coventry, East Greenwich, West Greenwich), bill sponsor.
“The Johnson’s Pond Civic Association reached out for assistance from the General Assembly in restoring and normalizing the water levels,” said Representative Thomas E. Noret (D-Dist. 25, Coventry, West Warwick), bill sponsor. “The regulation of the water levels on Johnson’s Pond are important not only for the recreation and property values of the hundreds of families that live on its shores, but for the safety and environment of all those communities that are downstream on the banks of the Pawtuxet River.”
“On behalf of the thousands of residents who live on Johnson’s Pond, we sincerely thank Governor McKee for preserving this important state asset and in so doing, a way of life for Coventry residents. Moreover, the legislation as written by Senator Lou Raptakis and Representative Thomas Noret now requires owners of any dam with more than 1,400 acres of storage capacity to apply to the RIDEM for a permit before adjusting water levels, thereby protecting a host of important state water bodies and their vibrant ecosystems,” said Marc Lemoi, President, Johnson’s Pond Civic Association.