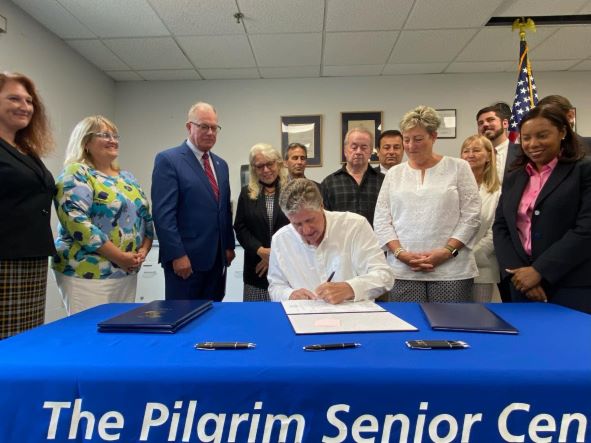 WARWICK, RI – Continuing his #RIMomentum Tour at the Pilgrim Senior Center in Warwick, Governor Dan McKee was joined by Lt. Governor Sabina Matos, House Speaker K. Joseph Shekarchi, other elected leaders and advocates to highlight recently passed legislative and budget initiatives that support Rhode Island’s senior population.
Among those investments is $4 million in the FY23 state budget to increase the Circuit Breaker Tax Credit available to qualifying seniors and adults with disabilities, raising the maximum credit received to $600 and increasing the income threshold for eligibility to $35,000. This property tax credit program provides relief to eligible seniors and adults with disabilities who own or rent their homes. The budget also increases the amount of pension income that is exempt from state taxation for all retirees from the first $15,000 to the first $20,000.
“Whether it’s tax relief, housing, food security, or utilities, our Administration is looking at these issues through the lens of ensuring our seniors are able to not just live in the Ocean State, but that they are also able to thrive here,” said Governor Dan McKee. “I am proud to deliver a budget and sign several pieces of legislation that support and protect our seniors, and I thank the sponsors and advocates who helped see them across the finish line.”
“Both as chair of the Long Term Care Coordinating Council, and as a granddaughter whose family cares for a senior, I am dedicated to ensuring that every Rhode Islander has the support they need to live full, rich, and long lives. The budget we have passed this year, along with the bills signed today, will significantly improve on our seniors’ quality of life,” said Lt. Governor Sabina Matos. “We are going to continue working to provide high-quality services to our neighbors of every age.”
The Governor also ceremonially signed several pieces of legislation:
“Unused medication worth billions of dollars gets thrown out every year,” said Rep. Joseph M. McNamara (D-Dist. 19, Warwick, Cranston). “Medication will often go unused because a patient’s condition improves, they change doses, or they pass away. Instead of disposing of the unused medicine, people would be able to donate it. By collecting these unused drugs and redistributing them to qualifying individuals, we would be able to increase medication access, especially to underserved populations.”
“Many patients who suffer from cancer and other serious illnesses find it very difficult to afford care. A drug redistribution program that includes stringent safety measure to protect patients will go a long way toward saving lives while preserving the financial well-being and dignity of many in Rhode Island who cannot afford medication,” said Sen. Joshua Miller (D-Dist. 28, Cranston, Providence), chairman of the Senate Health and Human Services Committee.
Said Rep. Jason Knight (D-Dist. 67, Barrington, Warren), “This bill recognizes that elder financial abuse can take many forms. It isn’t limited to people who are no longer able to handle their own affairs, and our laws need to account for more possibilities to ensure real protection against these crimes.”
“This legislation closes a confusing and unintended gap between our requirement to report abuse and when charges can be brought for elder financial exploitation. Ultimately, it also protects more Rhode Islanders. A wider definition better ensures that more cases can be successfully prosecuted, and ultimately provides greater protection to Rhode Islanders,” said Sen. Cynthia A. Coyne (D-Dist. 32, Barrington, Bristol, East Providence), who serves as Senate Judiciary Committee Chairwoman and led a task force on elderly financial exploitation from 2018 to 2019.
“This legislation really helps our most vulnerable,” said Rep. Kathleen A. Fogarty (D-Dist. 35, South Kingstown). “Those over 60 are particularly vulnerable to food insecurity, and this bill takes a difficult process and makes it a little easier by reducing the length of the application, increasing the recertification period from two to three years, and waiving the requirement of interviews for recertification.”
“There are many seniors who are having difficulty obtaining SNAP benefits because of the difficulty of the process,” said Sen. V. Susan Sosnowski (D-Dist. 37, South Kingstown, New Shoreham). “Many seniors don’t apply for these benefits because the application and recertification process are so cumbersome. We have an aging population that’s really suffering nutritionally and we should do everything we can to make the benefits more accessible to them.”
“Thank you, Governor McKee and RI General Assembly members, for your leadership helping build safe, and healthy environments for seniors and adults with disabilities across the state” said Office of Healthy Aging Director Maria Cimini. “These budget initiatives and bills move the state forward, building a better Rhode Island for all aging adults.”