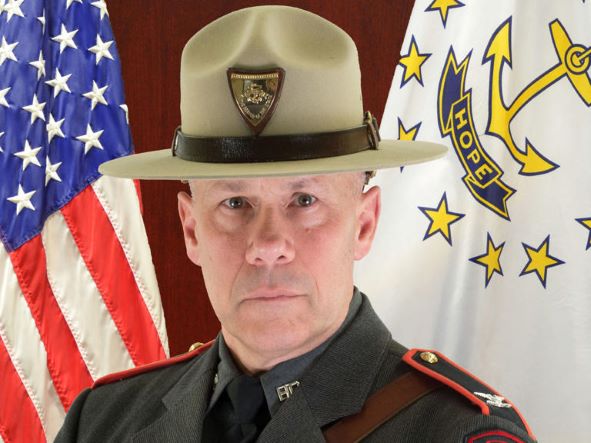 PROVIDENCE, RI – Governor Dan McKee today shared that Rhode Island State Police Superintendent and Director of Public Safety James M. Manni will be retiring from state service after a distinguished 28-year career with the State Police. Manni was appointed, late today, as town manager by the South Kingstown Town Council, a post he is expected to start May 2. He will remain at the helm of the State Police until April 29.
“Colonel Manni is a man of great integrity who has led this agency with the highest degree of professionalism and dedication,” said Governor McKee. “It is clear to anyone who knows him, that his commitment to the Rhode Island State Police is truly remarkable, and his leadership, particularly over these past three years, has been exemplary. He raised his hand and stepped forward, serving during some of the most challenging times in our history, and the State of Rhode Island is most grateful.”
“I have proudly served, shoulder to shoulder, with the men and women of the State Police to enhance public safety and to serve the people of Rhode Island with respect and dignity,” said Colonel Manni. “Leading this agency has been the honor of my lifetime. I leave with the confidence that the agency is set up to succeed and continue in its mission of serving and protecting.”
Colonel Manni pointed to several accomplishments during his administration, including internal restructuring; the creation of two new units within the State Police (the Traffic Safety Unit and the Special Victims Unit); commencing plans to build the agency’s first new barracks since 1931, the consolidated Southern Barracks; overhauling the agency’s promotional process; and conducting the pilot program of body-worn camera systems, all of which leave the agency poised for future success.
Governor McKee added: “Colonel Manni has been an incredible partner in our Administration’s efforts to build safer, stronger communities. We wish him well in his next endeavor, as he works to support and strengthen his own hometown of South Kingstown.”
The Governor is considering Colonel Manni’s successor and will make an announcement prior to Colonel Manni’s departure.