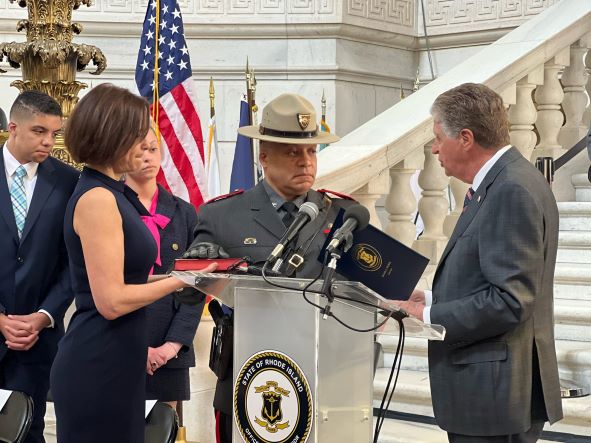 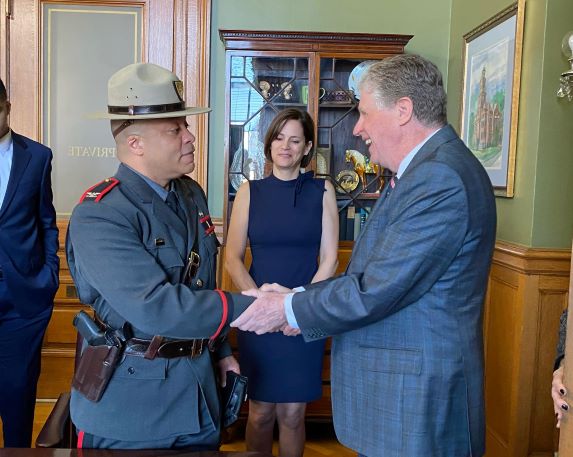 Colonel Weaver grew up in Cranston and is a 28-year veteran of the Rhode Island State Police, most recently serving as the Deputy Superintendent and Chief of Field Operations. In that position, he oversaw and was responsible for the Patrol Bureau, Detective Bureau, Division specialty units, Administration Bureau, and Department of Public Safety.
The Patrol Bureau includes the District “A” and District “B” Patrols, as well as Emergency Response and Service Units, and Governor’s Executive Security Detail. The Detective Bureau includes Cyber Crimes/Fusion Center/JCTF, Narcotics/High-Intensity Drug Trafficking Area Task Force (HIDTA), Violent Fugitive Task Force (VFTF), Gaming Enforcement, Special Victims Unit, and other specialized investigative units. The Administrative Bureau includes the Central Management Office, Management Information Systems, Fleet/Supply, Technology and Communications, NCIC/RILETS, and Capital Project Unit. The Department of Public Safety includes the Capitol Police, Division of Sheriffs, E-911 Uniform Emergency Telephone Systems and personnel, Public Safety Grants Administration Office, Division Training Academy, and Municipal Training Academy.
Colonel Weaver served at all barracks as a member of the Uniform Bureau, including as Night Executive Officer and Assistant Patrol Commander of both Hope Valley and Wickford Barracks. He was a member of the Honor Guard Unit and served as a Field Training Officer as well as the District “A” Commander. He was the officer-in-charge of the State Police Training Academy and Commandant of the 2016 Rhode Island State Police Recruit Training Academy class. He later served as the Director of Training and oversaw the daily operations of the Division Training Academy, and Municipal Training Academy. More recently, he was the Uniform Bureau Commander and was responsible for uniform troopers throughout Rhode Island.
Prior to joining the Rhode Island State Police, Colonel Weaver served in the United States Marine Corps. He currently lives in Cumberland with his wife Michelle, and has two children.
“It is an honor and privilege to have the opportunity to serve Rhode Island in this role,” said Colonel Weaver. “I look forward to leading the men and women of the Rhode Island State Police as we work every day ‘In the Service of the State.’”
“I want to again thank Colonel Manni for his service to the State of Rhode Island. He served with integrity and professionalism, and he leaves a strong legacy upon his retirement,” said Governor McKee.
Colonel Weaver succeeds Manni, who retired from state service after 29 years with the State Police, including four as Superintendent.