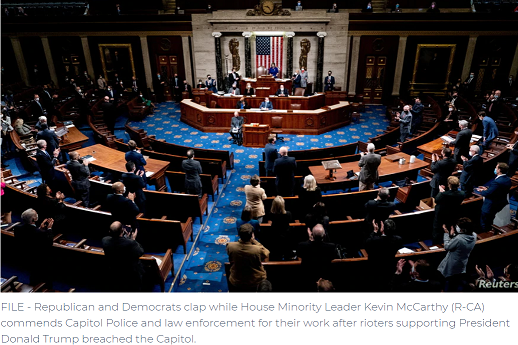 WASHINGTON – The U.S. House of Representatives is voting Wednesday on the unprecedented second impeachment of President Donald Trump.

Democrats hold a majority in the chamber and have enough votes to approve impeachment on their own, but they are being joined by a growing number of Republicans.

Congresswoman Jaime Herrera Beutler announced late Tuesday she would vote in favor of impeachment, saying in a statement Trump “acted against his oath of office.”

“The President of the United States incited a riot aiming to halt the peaceful transfer of power from one administration to the next,” Herrera Beutler said.

Congresswoman Liz Cheney, a member of the Republican Party’s House leadership team, said in explaining her support for impeachment there “has never been a greater betrayal” by a U.S. president.

The other Republicans who said they would vote to impeach Trump include Congressmen John Katko, Adam Kinzinger and Fred Upton.

House Republican leader Kevin McCarthy, a close Trump ally, said “impeachment at this time would have the opposite effect of bringing our country together.”

Trump had a similar message during a visit to the U.S.-Mexico border on Tuesday.

“It’s causing tremendous anger and division and pain far greater than most people will ever understand, which is very dangerous for the USA, especially at this very tender time,” Trump said.

He urged “peace and calm” and said now is a “time for law and a time for order.”

Trump, who in a video last week told the mob of his supporters “we love you, you’re very special,” did not answer questions from reporters.

While Republicans voted lockstep against impeaching Trump last year for pressuring Ukraine to investigate Democrat Joe Biden, who is now president-elect, House Republican leaders are indicating they do not intend to pressure their members to vote against impeachment this time around.

If the House approves the impeachment resolution, the matter moves to the Senate for a trial where conviction is far from certain.

“It is their constitutional and patriotic duty to present the case for the President’s impeachment and removal,” Pelosi said in a statement.  “They will do so guided by their great love of country, determination to protect our democracy and loyalty to our oath to the Constitution.  Our Managers will honor their duty to defend democracy For The People with great solemnity, prayerfulness and urgency.”

It is unclear whether House leaders would immediately send the impeachment resolution to the Senate, given that Trump’s term ends next week.  Even if Trump has already left office, a Senate impeachment conviction after his term ends would bar him from holding federal office again.

The impeachment resolution is the second of two routes House Democrats pursued to try to remove the president from office in response to the Capitol attack.

The House passed a resolution late Tuesday calling for Vice President Mike Pence and members of Trump’s Cabinet to use their constitutional authority to remove Trump from  office as unfit to serve.

The 223-205 vote was almost entirely along party lines.

Even before the House voted Tuesday, Pence sent a letter to Pelosi explaining he would not take action under the 25th Amendment to the U.S. Constitution, which allows for the vice president and a majority of the Cabinet to declare a president unable to discharge the powers and duties of his office.

“I do not believe that such a course of action is in the best interest of our Nation or consistent with our Constitution,” Pence wrote.  “Last week, I did not yield to pressure to exert power beyond my constitutional authority to determine the outcome of the election, and I will not now yield to efforts in the House of Representatives to play political games at a time so serious in the life of our Nation.”

The impeachment resolution cites Trump’s unfounded accusations that he was cheated out of a second term by voting and vote-counting irregularities, his pressure on election officials in the southern state of Georgia to “find” him more than 11,000 votes to overtake Biden’s margin of victory in the state, and his statements at a rally last Wednesday urging thousands of supporters to march to the Capitol to pressure lawmakers to overturn the election outcome.

Biden said it is his “hope and expectation” that the Senate could simultaneously hold an impeachment trial and confirm his Cabinet appointments after he takes office, while also approving more aid for the flagging U.S. economy weakened by the soaring coronavirus pandemic.

He said Monday of the rioters, “It is critically important that there’ll be a real serious focus on holding those folks who engaged in sedition and threatening the lives, defacing public property, caused great damage — that they be held accountable.”