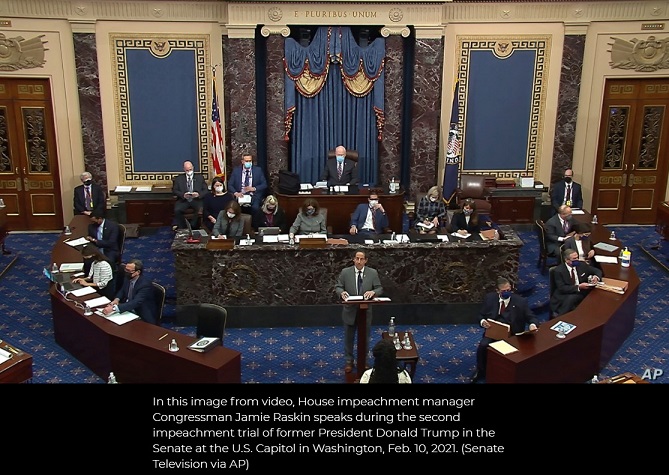 WASHINGTON – Prosecutors at former U.S. President Donald Trump’s Senate impeachment trial began to lay out their case against him on Wednesday, saying he was “no innocent bystander” to the violence that erupted at the U.S. Capitol last month as lawmakers certified Democrat Joe Biden’s victory in the November election.

Congressman Jamie Raskin, the lead impeachment manager, and other Democratic lawmakers said Trump laid the groundwork for the storming of the Capitol over a period of weeks leading up to the election with dozens of unfounded claims that the only way he could lose was if the election was rigged against him.

Raskin contended that Trump, by urging hundreds of his supporters to “fight like hell” in confronting lawmakers at the Capitol on January 6, ignited the mayhem that left five people dead, including a Capitol Police officer.

“He incited this attack,” Raskin told the 100-member Senate that will decide whether Trump should be convicted of a single article of impeachment brought by the House of Representatives. It accuses him of “incitement of insurrection.”

“He clearly surrendered his role as commander in chief and became the inciter in chief,” Raskin argued. He contended that Trump, now out of office after his four-year term ended and Biden was inaugurated January 20, “was singularly responsible” in exhorting his supporters to try to upend Biden’s victory.

Hundreds of his supporters – perhaps about 800, according to law enforcement authorities – rampaged through the Capitol, breaking windows, bashing doors, ransacking some congressional offices and scuffling with police. Dozens of the rioters, many of whom bragged on social media about storming into the two chambers of Congress, have been charged with criminal offenses as the investigation of the chaos continues.

The House impeachment managers showed dozens of Twitter comments and video clips in which Trump claimed election fraud and urged his supporters to show up in Washington January 6 as Congress met to certify the 306-232 Electoral College vote favoring Biden.

“Will be wild!” Trump tweeted.

After nearly four hours of mayhem, lawmakers certified the Biden victory in the middle of the night early on January 7, making Trump the fifth U.S. president in the country’s history to be defeated after a single term in office.

Now, Raskin said, in 2021 the usually routine certification of U.S. presidential election results will be remembered as “a day that will live in disgrace.”

Congressman Joe Neguse, another House impeachment manager, said that in rallying supporters before the storming of the Capitol complex, Trump “wanted to stop the transfer of power even though he had lost the election.”

“This attack was provoked by the president,” Neguse said. “It was predictable and foreseeable. He had the power to stop it and he didn’t.”

Delegate Stacey Plaskett of the U.S. Virgin Islands, another House impeachment manager, said the rioters “were doing the duty of their president. He knew of the violence they were capable of.”

Congresswoman Madeleine Dean of Pennsylvania contended that Trump was “desperate to retain power by any means possible.” She said Trump told the protesters “exactly what he wanted them to do.”

Dean quoted from Trump’s speech to his supporters at a rally near the White House where he told them, “We will never give up. We will never concede.”

The House impeachment managers have up to 16 hours over Wednesday and Thursday to make their case before Trump’s lawyers get an equal amount of time.

Trump’s lawyers say that he bears no responsibility for the attack on the Capitol, a worldwide symbol of American democracy.

Instead, they say that Trump’s rhetoric amounted to normal political discourse and was protected by the U.S. Constitution’s First Amendment guarantee of freedom of speech.

The Senate voted 56-44 on Tuesday to move ahead with the trial, rejecting Trump’s claim that it was unconstitutional to try him on impeachment charges since he has already left office.

Raskin said Tuesday that not holding the trial would create a “dangerous” new “January exception” during which future U.S. presidents could act with impunity in their final weeks in office.

“It’s an invitation to the president to take his best shot at anything he may want to do on his way out the door,” Raskin said.

The Democrats showed the Senate a dramatic video montage establishing a timeline of the chaotic events on January 6.

Trump lawyer Bruce Castor Jr. rejected the notion of a “January exception” in which future presidents would be immune as “nonsense.”  He said that if Trump committed any offenses, “arrest him,” now that he is a private citizen and no longer immune from prosecution.

Castor quoted the Constitution saying that conviction on impeachment charges “shall not extend further than removal from office,” an impossibility since Trump’s term has already ended.

The 56-44 vote to proceed with the trial, in which six Republicans joined all 50 Democrats, showed that Trump remains likely to be acquitted. A two-thirds majority is needed to convict Trump, meaning 17 Republicans would have to vote with the Democrats.

Whatever the outcome, Trump is the only U.S. president to be impeached twice.

Trump declined Democrats’ offer to testify in his defense and is not expected to attend the trial. The high-profile proceeding, broadcast across the country, could last a week or longer.