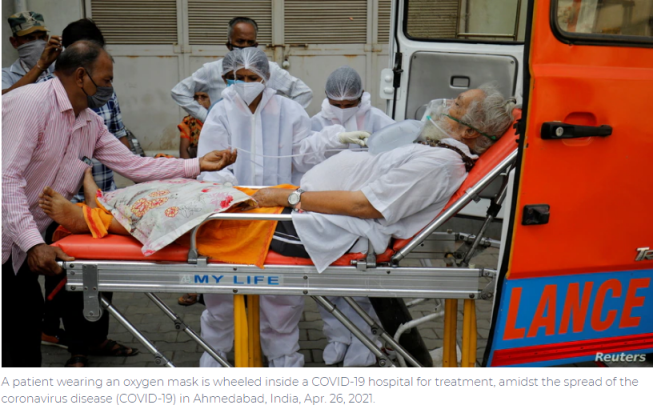 The head of the World Health Organization said India’s situation is “beyond heartbreaking” as the country reported nearly 353,000 new confirmed cases of COVID-19 on Monday, the fifth consecutive day of more than 300,000 coronavirus infections.

“WHO is doing everything we can, providing critical equipment and supplies, including thousands of oxygen concentrators, prefabricated mobile field hospitals and laboratory supplies,” WHO chief Tedros Ghebreyesus told a briefing from Geneva.

He noted the WHO has already announced 2,600 extra WHO staff members will go to India to help with efforts to fight the disease.

India’s health care system is malfunctioning amid a catastrophic second wave of the virus, with hospitals filled beyond capacity and unable to care for any new patients and a shortage of oxygen canisters so dire that some COVID patients are literally gasping for air.

India also posted 2,812 COVID-related deaths Monday, another one-day record, as crematories have been busy night and day burning people’s remains.  The capital New Delhi has extended a lockdown that was set to expire on Monday for another week.

This second wave has been blamed on the spread of more contagious variants of the virus, plus the easing of restrictions on large crowds when the outbreak appeared to be under control earlier this year.

Prime Minister Narendra Modi, who has come under fire for holding packed political rallies and allowing an annual Hindu religious festival that attracted millions of pilgrims, urged all Indians to get vaccinated in his monthly radio address Sunday and not be swayed by what he called “any rumor about the vaccine.”

India has administered almost 138 million doses of the vaccine, but only 1.6% of its estimated 1.4 billion people are fully vaccinated, according to the Johns Hopkins Coronavirus Resource Center.

U.S. President Joe Biden announced Sunday that the United States will send raw materials to India to produce vaccines, plus ventilators, rapid diagnostic testing kits and personal protective equipment.  From his Twitter account, he said, “Just as India sent assistance to the United States as our hospitals were strained early in the pandemic, we are determined to help India in its time of need.”

Several transport planes left Britain Monday for India, carrying hundreds of items including ventilators and oxygen concentrators, which collects atmospheric air and converts it into pure oxygen.  Other countries, including France and Germany, have said they will also help, along with India’s neighbor and sometimes foe, Pakistan.

India now has more than 17.3 million total cases — just second behind the United States —  including 195,123 deaths, according to Johns Hopkins.  India’s death toll is fourth behind the U.S., Brazil and Mexico.

Thailand, which has banned travelers from India, is undergoing its own surge of new coronavirus cases.  The government ordered the closure of movie theaters, gyms and parks beginning Monday and lasting until May 9, as it posted 2,048 new cases, bringing its overall casualty rate to 57,508 infections, including 148 coronavirus-related fatalities.

The Philippines announced Monday that its total coronavirus case count since the pandemic began has topped one million. The country is facing a surge of infections in the capital, Manila, and surrounding regions.

Meanwhile, Ursula von der Leyen, the president of the European Commission, told The New York Times Sunday that American tourists who have been fully vaccinated will be allowed to visit the European Union this summer.  Von Der Leyen said the rapid pace of vaccinations in the United States, along with advanced talks between officials in the U.S. and the E.U. over the issue of official vaccine certificates as proof of immunity, will enable the 27-member bloc’s executive body to restore trans-Atlantic travel.

And Hong Kong and Singapore announced Monday they would launch a two-way “travel bubble” beginning May 26 that would do away with mandatory quarantine periods for visitors to either destination.  The bubble was initially set to begin last November, but was postponed due to a surge of COVID-19 infections in Hong Kong.