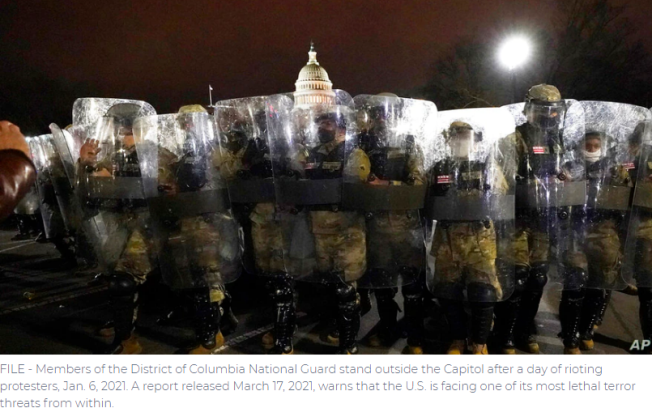 U.S. intelligence agencies are warning the country faces a substantial threat from within, fearing a range of domestic extremists could move forward with plans to carry out attacks against fellow citizens or the government itself.

The unclassified assessment, released Wednesday, describes the threat as broad, coming from lone offenders and small cells, all subscribing to a diverse set of violent ideologies but “galvanized by recent political and societal events.”

“Biases against minority populations and perceived government overreach will almost certainly continue to drive DVE [domestic violent extremist] radicalization,” according to the report, released by the Office of the Director of National Intelligence (ODNI), with input from other intelligence and law enforcement agencies.

The report further warned that a combination of factors, including conspiracy theories surrounding the most recent presidential election and conditions related to the coronavirus pandemic, “will almost certainly spur some DVEs to try to engage in violence this year.”

The unclassified findings, part of a larger, classified report sent to the White House and Congress, comes more than two months after thousands of Americans — including dozens of members of far-right groups — laid siege to the U.S. Capitol, angry over the outcome of November’s presidential election.

And it echoes intelligence warnings that have prompted officials to maintain a heightened police and security presence in Washington, with extended support from U.S. National Guard troops, until this coming May.

“Domestic violent extremism is one of the gravest and most persistent threats that we as a country face,” Homeland Security Secretary Alejandro Mayorkas told lawmakers at a virtual hearing Wednesday, prior to the report’s release.

“The threat landscape has significantly evolved,” he said. “We are fully engaged in addressing it.”

The two most dangerous, though, according to the report, are racially or ethnically motivated violent extremists and militia-based extremists.

The assessment also raised concerns about growing connections between white supremacists in the U.S. and those in other countries, warning “a small number” have traveled abroad to forge stronger ties.

“It’s clear we have a lot of work to do. And we need to do it quickly,” Representative Adam Schiff, the Democratic chairman of the House Intelligence Committee, said in a statement Wednesday.

Schiff called on the Biden administration to follow up on the assessment by sharing additional data on specific incidents, the number of investigations and prosecutions, and the resources being dedicated to the problem.

At the White House on Wednesday, press secretary Jen Psaki said the assessment was just part of a larger effort aimed at forging a more comprehensive approach to counter the rising threat.

Officials have said they are also looking to strengthen the National Security Council’s ability to respond by improving the flow of information between government agencies, supporting programs to prevent radicalization and finding ways to disrupt domestic extremist networks.

This assessment, they said, is just a first step.

“It seems clear to me that, finally, the government is now acknowledging the magnitude of the threat,” Colin Clarke, director of policy and research at the Soufan Group, an intelligence and security consultancy, told VOA. “The sense of urgency is finally here.”

“How in the world do you go about tackling the militia threat? You’re not going to disarm these guys,” Clarke said.

Another challenge will be the growing ties between the racially motivated extremists in the U.S. and those in other countries, which may be bolstered by certain state actors.

“We know that the Russians are playing around in the space,” Clarke said. “U.S.-based domestic violent extremists recognize that linking up with any kind of foreign element can be seen as a force multiplier, whether it’s in terms of funding, propaganda support, or bona fides and brand.”

Experts and officials also worry that U.S. domestic violent extremists have been using the coronavirus pandemic, with so many people trapped in their homes and on their computers or smartphones, to boost their numbers.

“Violent extremists are indeed trying to leverage the COVID-19 outbreak in a variety of ways,” a U.S. intelligence official told VOA when the pandemic first started to take hold, noting that prohibitions on large gatherings were “reducing the number of available targets.”

Now, with restrictions on gatherings in the U.S. being eased or abandoned, experts worry it may be only a matter of time before some violent extremists feel ready to act.

The information environment may serve to embolden them ever further.

A report Wednesday from the Anti-Defamation League’s Center on Extremism found white supremacist propaganda efforts in the U.S. nearly doubled in the last year, appearing in every state but Hawaii.

The ADL identified 5,125 cases of white supremacist propaganda for all of 2020, the most it has ever recorded, even though the number of incidents on university campuses fell by more than 50%, likely because of COVID-19 restrictions.