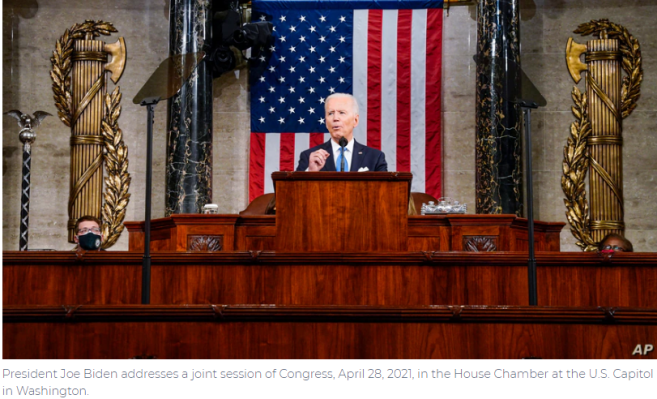 In his first joint address to Congress, U.S. President Joe Biden called on lawmakers to provide bipartisan support for his $4 trillion economic plan he said would provide Americans relief from the COVID-19 pandemic and make the U.S. more competitive with China.

“Now, after just 100 days, I can report to the nation America is on the move again,” Biden declared.

Biden was the first U.S. president to deliver a speech to Congress with two women sitting behind him on the dais: Vice President Kamala Harris and House Speaker Nancy Pelosi.

Unlike many of his recent predecessors, Biden embraced the role the federal government can play in improving lives. He said his $1.8 trillion spending package includes funding for preschool expansion, child-care subsidies and the establishment a national family and medical leave program.

Biden also touted his $2.3 trillion plan to rebuild roads and bridges, expand broadband access, particularly in rural areas, and other infrastructure projects such as revitalizing the country’s fragile power grid.

Biden argued that investing in the U.S. economy was needed to compete with China, a country with growing global influence and the world’s second largest economy that is also one of the world’s fastest growing.

The president appealed to Republican lawmakers who have voiced support for providing a path to U.S. citizenship for people who entered the country illegally as children, one of the issues he vowed to address during his presidential campaign.

Biden recalled the January 6 riot at the U.S. Capitol to block certification of his election and challenged Americans to do more to show the world that democracy remains intact.

“They look at the images of the mob that assaulted this Capitol as proof that the sun is setting on American democracy. They are wrong. And we have to prove them wrong. We have to prove democracy still works,” Biden declared.

Biden urged lawmakers to address the disproportionate number of Black men and women killed by police, a plea that came a week after former Minneapolis policeman Derek Chauvin was convicted of killing George Floyd.

“We have all seen the knee of injustice on the neck of Black America. Now is our opportunity to make real progress,” Biden said.

The president called on Congress to approve police reform legislation officially known as the George Floyd Justice in Policing Act of 2020 by the first anniversary of Floyd’s May 25 death in police custody, the first time he put a deadline on the issue.