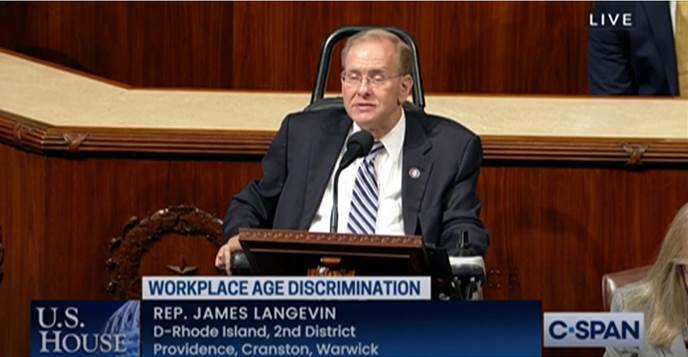 WASHINGTON – Congressman Jim Langevin (D-RI) today voted in support of H.R. 2062, the Protecting Older Workers Against Discrimination Act.  Although Congress passed legislation 54 years ago to prohibit discrimination against employees on the basis of age, a recent AARP survey found that 3 in 5 workers age 45 and older had seen or experienced age discrimination in the workplace. Langevin spoke on the House floor during debate on the bipartisan bill, which passed the House by a vote of 247-178.

Nearly one in three Rhode Islanders are ages 55 and older, among the highest proportions in the country.

The standard set forth in the 2009 Supreme Court case Gross vs. FBL Financial Services Inc. eroded workplace protections for older workers. It has also been used to discriminate against workers with disabilities, breaking a key promise of the Americans with Disabilities Act and undermining Congressional intent. The bipartisan Protecting Older Workers Against Discrimination Act will restore vital employment protections for millions of older American workers and workers with disabilities, shielding employees from future discrimination.

“No worker — no matter their age — should experience discrimination in the workplace, so I was thrilled to pass this legislation today with a resounding bipartisan majority,” said Langevin, who co-chairs the Bipartisan Disability Caucus. “The Protecting Older Workers Against Discrimination Act will restore workplace protections that have been eroded by conservative court rulings, and I urge my Senate colleagues to take up this critical legislation without delay.”