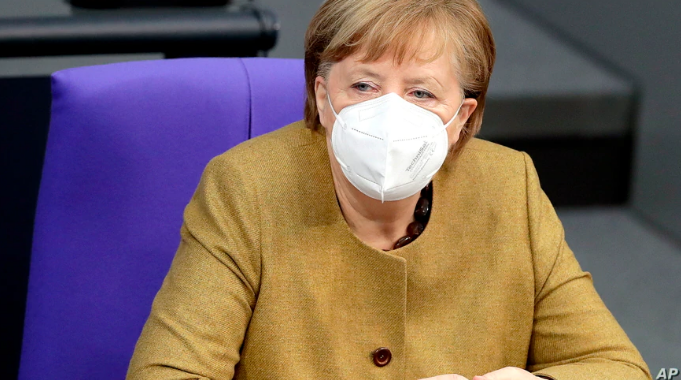 German Chancellor Angela Merkel Thursday defended her decision to extend the nation’s COVID-19 lockdown, saying the variant strains of the virus pose a threat and she does not want to make the mistakes that led to a second surge last year.

Following a meeting Wednesday with Germany’s 16 state governors, Merkel announced they agreed to extend the current COVID-19 lockdown – due to expire Sunday – to March 7.

Speaking to the Bundestag – the lower house of the German parliament – Merkel said they did not act fast enough in 2020 to prevent a second surge in infections late in the year, and as health officials now warn about the spread of more virulent variant COVID-19 strains in the country, she said they need to learn from their mistakes.

The number of new daily infections has dropped in Germany since the current lockdown began in late November, prompting calls for an easing of restrictions. Some schools and businesses such as hair salons will be allowed to open sooner, with strict hygiene restrictions.

But Merkel argued the nation is in a battle with the virus, and their opponent does not pay attention to dates, it pays attention to infection rates. She said the government is basing the next step in lifting restrictions on reaching an infection rate of 35 COVID-19 infections per 100,000 people over a seven-day period.

Germany’s Robert Koch Institute for infectious diseases reported, as of Wednesday, the nation had an infection rate of 68 per 100,000 for the previous seven days.

The institute also reported, as of Thursday, the nation added 10,237 new cases and 666 deaths in the past day, taking the total case count since the start of the coronavirus outbreak to 2.31 million and the death toll to 63,635.