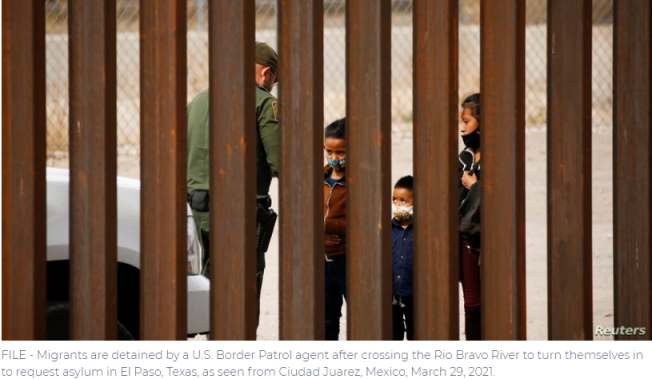 EL PASO, TEXAS – Jose Luis Boyeduana waited 13 years to reunite with his parents. The 16-year-old Ecuadorian national made the decision at the end of 2020 to travel to the U.S., undertaking a 3,000-kilometer journey to America’s southern border.

“I entered on January 26, through a border crossing at Miguel Aleman [a municipality in Tamaulipas, Mexico],” Boyeduana told VOA, adding that he was held for two months at a federal facility in Roma, Texas.

Tens of thousands of unaccompanied minors have been intercepted at the U.S.-Mexico border in recent months, forcing the Biden administration to scramble to identify additional facilities — some makeshift — to house them.

Under President Joe Biden, the United States has opened about 14 new shelters to house migrant youths. Meanwhile, Mexican President Andres Manuel Lopez Obrador recently told reporters his administration will open shelters on the Mexican side of the border.

Unaccompanied minors intercepted at the border undergo a two-step process before they are released to close relatives in the United States. First they are taken to a border patrol station. Within 72 hours, however, they must be transferred to the custody of the Office of Refugee Resettlement under the Department of Health and Human Services and placed in facilities designed to accommodate the needs of children.

It is a process Boyeduana knows firsthand. Last month, U.S. authorities reunited him with his mother and father, both of whom reside in the United States, after verifying that they were his legal guardians.

“This happiness is forever, being with my son,” Carlos Lozada, Boyeduana’s father, told VOA.

Boyeduana had been living with his grandparents in Ecuador since he was 3.

He was allowed to stay in the United States under the Biden administration’s policy exempting minors and some families with small children from a blanket ban on accepting unauthorized border crossers. The ban was enacted under the former Trump administration as an emergency measure necessitated by the coronavirus pandemic.

The Biden administration has retained the policy in an amended form, expelling adult migrants as well as families with older children.

The White House has made it clear that asking for asylum does not guarantee permanent residency in the U.S.

“What I want to emphasize is that many people are not going to get their asylum claims in the United States and it is possible that they will return to their country of origin at the end of that process,” Roberta Jacobson, Biden’s coordinator on the southern border who is leaving the position at the end of April, told VOA. “So really the message is to wait because there will be more options — more secure, less expensive and in a safe way, to perhaps have the possibility of reaching the United States in the future.”

To seek asylum in the United States, a person must demonstrate they fear persecution in their home country on account of at least one of five protected grounds: race, religion, nationality, political opinion, or their particular social group.

Migrants’ motivations for coming to the United States may or may not meet the standards set forth for asylum relief.

Many unauthorized border crossers say they seek to escape violence, poverty and, in many cases, the effects of natural disasters. Large swaths of Central America were devastated by hurricanes coinciding with the coronavirus pandemic that has stunted recovery efforts.

Honduran Eda Cristelia Melendez, who is in her 70s, is currently living with her young granddaughter in a shelter in Mexico, just across the border from El Paso, Texas.

She says U.S. authorities sent the pair back to Mexico after they tried to cross the border.

The grandmother says she made the trip after refusing a request by the girl’s mother, who lives in Chicago, to send the child across the border by herself.

“‘Have you thought [of what could happen] if the girl goes alone?’” Melendez recalled asking.

“We’re working with partners throughout the region to deter the dangerous travel of those unaccompanied children from the region,” said Emily Mendrala, State Department Bureau of Western Hemisphere Affairs.

Meanwhile, Republican lawmakers blame the Biden administration for sharp increases in border arrivals, saying it signaled a departure from former President Donald Trump’s restrictive policies, causing migrants to believe the United States would take them in.

Representative John Katko, a Republican from New York and ranking member of the House Committee on Homeland Security, says he cautioned the Biden administration against sudden immigration policy shifts.

“Homeland Security Republicans warned of this impending crisis months ago and we are committed to prioritizing the safety of Americans and the security of our homeland,” Katko wrote.

Amid the political cacophony in Washington, José Luis Boyeduana is celebrating a goal reached.

“Happiness can only be found with your parents,” he said.